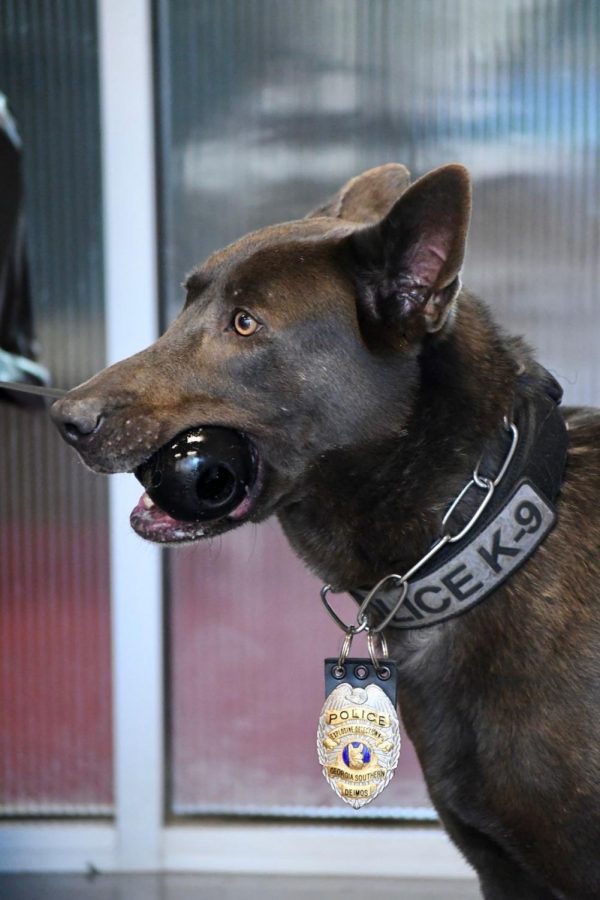 Deimos is trained to patrol sporting events on the Statesboro campus.

Erk McCurdy, a K-9 handler of 17 years and a Georgia Southern University Police officer, provided information regarding the training process for K-9 officers at GS.

UPD currently has two K9 officers: Bear for the Armstrong Campus and Deimos on the Statesboro campus.

Deimos and Bear usually train at least once a week in a different setting each time, McCurdy said. Both canines specialize in detecting explosives, so their training process is centered around sniffing out materials that could be used to make them.

Explosive detection canines are common at Georgia colleges, including Georgia Tech, the University of Georgia and Kennesaw State University.

Dogs are visual learners and have to see the source of the odor before they can be trained to sniff it out, McCurdy said.

“What you do is you put the odor in what’s called a training box, and their toy is also in the box,” McCurdy said. “When the dog gets to the box and sniffs out the odor, the toy automatically pops out, and that’s what they’re working for.”

McCurdy said officers typically look for dogs with a high-prey drive, meaning they like to chase after objects.

“When you do the training you always want it to be fun for [the dogs],” McCurdy said. “So you may be presenting the boxes and if you see the dog’s not sniffing, you don’t scold him. You would let him take a break and then go at it again because you always want to keep it a game to them.”

It typically takes about a year to a year-and-a-half to fully train explosive detection K-9s, but it all depends on their drive, McCurdy said.

The K-9s are called in to do sterility sweeps for events where large crowds are expected, in which they sniff out the area for potentially hazardous materials.

You can expect to see Deimos or Bear patrolling sporting events on the Statesboro and Armstrong campuses, or any events where the governor is present.