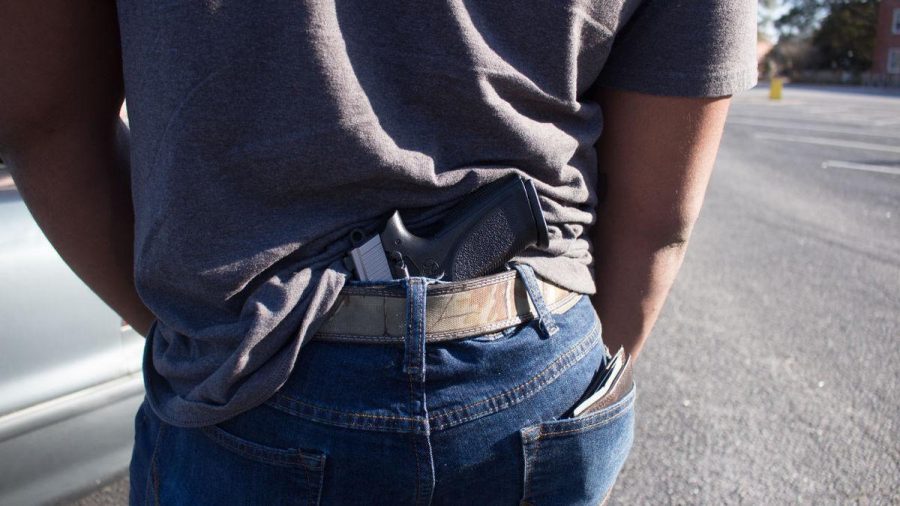 Following recent events across the country involving active shooters, the Georgia Southern University Chief of Police provided information regarding the university’s plan for any possible active shooting situation on campus.

“An individual must use his/her own discretion during an active shooter event as to whether he/she chooses to run to safety or remain in place,” the GS Emergency Operations Plan reads.

The following are instructions listed in the plan for an active shooter situation.

The Emergency Operations Plan states that if the shooter is outside, leave the area if safe to do so, while warning others that appear to be unaware of the situation. From a safe location, contact police and report the incident.

If the shooter is inside, evacuate the building if you can do so without harm. At a safe distance, call 911 and provide as much information as possible about the incident. Warn others that appear to be unaware of the situation to stay away from the building.

If law enforcement approaches, put any items in your hands down, raise your hands over your head with your fingers spread and remain calm. Do not run toward the police unless directed to do so.

If unable to evacuate the building, the Emergency Operations Plan advises hiding in a room that can be locked or barricaded with heavy objects like desks, tables or cabinets.

When hiding, turn off all lights, silence cell phones, close window blinds and turn off computer monitors. Remain out of sight and as low as possible with solid objects between you and the doors and windows.

Remain quiet and disregard any alarm systems unless you are in immediate danger from fire or smoke.

Finally, leave the room and building as directed by law enforcement. When approaching law enforcement officers, empty your hands and raise them above your head with fingers spread. Stay calm and quiet.

If you are unable to escape, as a last resort, attempt to disrupt or incapacitate the shooter.

The Emergency Operations Plan states that an individual should be completely committed to their fighting actions by using physical aggression or by throwing items to disable the attacker. As soon as there is an opening, run to safety.

Signs of a potential shooter

The Emergency Operations Plan encourages faculty, staff and students to report any worrisome or violent behavior to the University Police.

McCullough encourages students to keep an eye on their surroundings and peers, and to not hesitate to contact UPD if they have any concerns.

“Being aware of your surroundings and the people you come in contact with is important,” McCullough said. “A lot of times, those individuals that become active shooters have given off some sort of indication prior to the shooting that something was amiss with them.”

Any physical violence toward a person or propertyDirect or indirect threats of violenceAny act, gesture or statement that would be interpreted by a reasonable person as threatening or intimidating, such as an overt physical or verbal intimidation, throwing objects or other gestures intended to cause fear, or making contextually inappropriate statements about harming others.Unusual or bizarre behavior that would cause a reasonable person to fear injury or harm due to its nature and severity, such as: stalking, erratic or bizarre behavior suggestive of mental disturbance or substance abuse, fixation with mass murder, weapons or violence generally, or fixations with hate group, terrorist or extremist material.Any statements or behaviors indicating suicide. ​

Anyone who witnesses suspicious behavior should report the circumstances to UPD at 912-478-5234.

McCullough said UPD is in the process of purchasing automatic locks to be installed for possible active shooting situations.

“Armstrong actually has them already, but we’ve started the purchasing process for Statesboro and Liberty,” McCullough said. “It’s basically a metal switch that goes over where the lock is, and if you flip the switch it will allow the locks to engage and lock all doors within a second.”

The Office of Public Safety currently offers an all-female Rape Aggression Defense System class to help women defend themselves against assault. RAD also has a self-defense course for men, but Public Safety is still trying to find instructors to teach it.

“We’ve had some questions about men’s courses, but RAD doesn’t offer that class as often because of lower demand. In the meantime, we’ve talked about trying to find an outside instructor that could teach basic self-defense techniques for men,” McCullough said.

McCullough said current emergency operations plans are reviewed annually by the university and the Board of Regents. The GS Emergency Operations Plans for 2018 are being updated at this time to incorporate the Statesboro, Armstrong and Liberty campuses