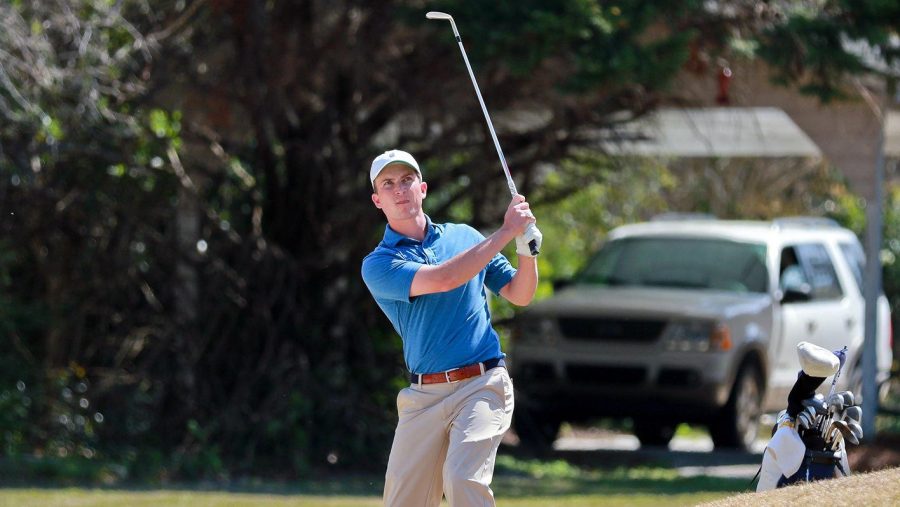 Steven Fisk qualified for the U.S. Amateur in 2017.

When junior golfer Steven Fisk was asked to give advice for someone who was just starting out with golf, his answer was simple.

“Go have fun, it’s too stressful to not enjoy being out there,” Fisk said.

Fisk has done just that in his career with the Georgia Southern golf team.

The junior from Stockbridge, Georgia has already become one of the top golfers in GS history earning first team All-Sun Belt and Sun Belt Freshman of the Year honors in past seasons.

Despite none of his family playing golf seriously, Fisk’s parents built a par-3 course and driving range when he was five.

“If I wanted to hangout with my dad, I’d go hang out on the course,” Fisk said. “Dad saw there was an opportunity for a golf course so he put it in.”

So from a young age Fisk had a fascination and skill for the sport of golf, but Fisk’s success has reached beyond the Statesboro lines.

Last summer, Fisk qualified for the 2017 U.S Amateur in Los Angeles. While he missed match play by two shots, Fisk said that the golf course of this event was his favorite he’s played on.

“It’s a whole different vibe out there,” Fisk said of the Riviera. “You can feel it.”

He has also been ranked in the NCAA top 25 since November, rising up all the way to number three.

But if you were to talk to Fisk, you’d have no idea he was one of the top amateur golfers in America.

“I try not to think about it,” Fisk said. “I’ll look back at the rankings after each tournament to see where I’m at. Obviously, I’m trying to be an All-American by the end of the season so seeing where I am is helpful.”

Though golf is an individual sport, in college the scores are combined and averaged in tournaments.

Since Fisk joined the Eagles in 2015, GS has had 24 top 10 finishes which is absolutely incredible.

After last season’s great year, the Eagles fell to Georgia State in match play in the Sun Belt Championship.

“We just got beat,” Fisk said. “This year I think we’re the team to beat, on paper.”

Why shouldn’t they be? The Eagles have shot an average 284.75 through eight tournaments, which is .25 under par.

The second best team in the Sun Belt this season is Coastal Carolina who has shot an average 290.25, which is 4.25 over par.

GS has three of the top four Sun Belt golfers with Fisk and seniors Jake Storey and Archer Price.

Fisk credits the success to the team’s pride in each other’s success.

Steven Fisk has become a national headline and has a strong chance to win the Fred Haskins Award which is given to the top NCAA golfer, but Fisk isn’t focused on that.

“We’ve had guys this semester playing really well besides me so they’ve been pushing me to play better,” Fisk said. “We’re all pushing each other and it has made the whole team work a lot harder.”

With one tournament until the Sun Belt tournament, Fisk is ready for the long week in Destin, Florida.

“We play a lot of golf in a short amount of time,” Fisk said. “We want to win and we’re very well prepared for that.”

GS hasn’t had an All-American since football kicker Younghoe Koo in 2016. Fisk wants to change that, but not without the help of his teammates.

“My favorite thing to say is ‘the best way to help the team is to help myself,’” Fisk said. “[Having national success] is something I felt I could always do and I hadn’t shown that to this extent until this year. But it’s cool, it really is.”