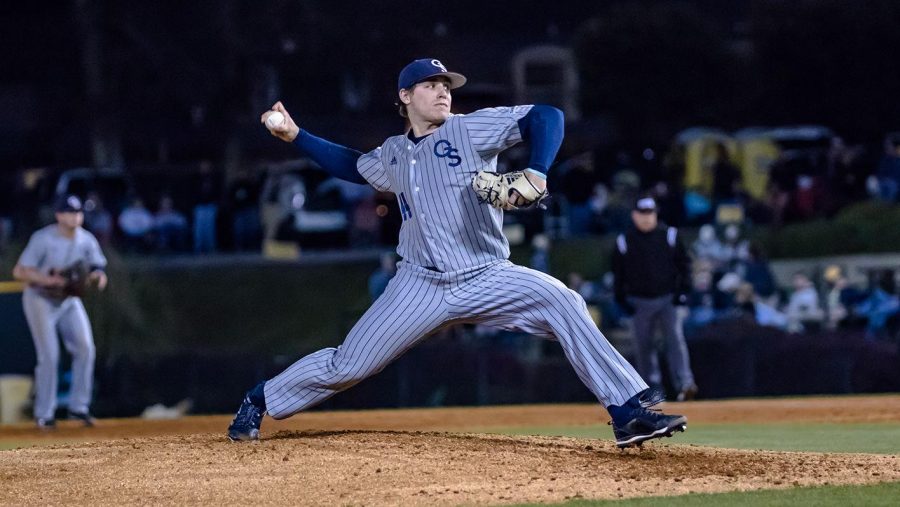 To kick off the week, the Eagles traveled to Southern Miss to play the nationally ranked Golden Eagles, getting swept in the process. GS fought hard in the series, dropping the first game 3-4 in ten innings, and the second game 2-3. They would lose the third game by a score of 2-8 before heading back east to Macon where they faced Mercer.

The Eagles squared off against Mercer during the middle of the week, and led the Bears 5-1 going into the fifth, but in the bottom half the Eagles surrendered four runs.

GS took the lead back in the sixth inning and held it until the eighth inning. Leading 8-6 in the eighth, the Eagles surrendered five runs, allowing the Bears to take a commanding 11-8 lead which would be the final score.

Sun Belt conference play opened up over the weekend, as the Louisiana Ragin Cajuns traveled to J.I. Clements Stadium to face the Eagles.

GS got a much needed series win, starting conference play out the right way. GS beat Louisiana in the first game 6-3 while never trailing after the third inning.

The Eagles dropped the second game by a score of 2-11, setting up a rubbermatch for the third game of the series. The game Sunday started at an unusual 11 a.m. first pitch, and the Eagles fell behind the Ragin Cajuns early before late inning heroics launched them to victory. GS trailed 1-4 before they pushed across four runs, taking a 5-4 lead.

After a 2-5 week, the Eagles fall to 9-11 for the season. GS was scheduled to play at Bethune-Cookman on Tuesday, March 20, but the game was canceled due to weather.