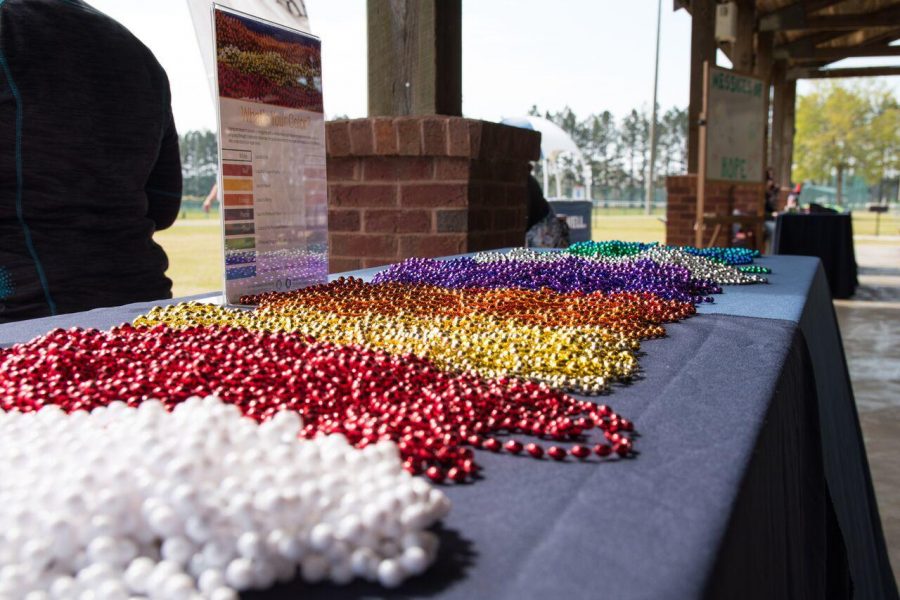 Participants were given needs to wear on the walk. The different colors represented the meaning for the walk.

Around 20 participants walked in Georgia Southern University’s “Out of the Darkness” suicide prevention and awareness walk on March 24.

While these community walks are organized nationally by the American Foundation for Suicide Prevention, the walks on the GS campus began six years ago after a GS freshman took her own life.

University Wellness Director Michelle Martin said that the yearly walks are important to students who are struggling with suicidal thoughts and for those who wish to help.

“Suicide is the leading cause of death for college students,” Martin said. “There’s 1,100 college students that are lost to suicide each year so it’s important for us to raise awareness about mental health and coping strategies and how to support other people.”

Participants walked a 5K route that went through the GS campus that started from the RAC, pass the Rotunda, around Sweetheart Circle, down the pedestrium and returned back to the RAC.

Participants also wore beads of various colors that represented a different reason for participating in the walk.

GS Alumna and walker Samantha Smith said this was her first time attending the walk.

“When I heard about the walk, it just makes you think about all the people who have lost their lives to suicide,” Smith said. “Just in my years here in Statesboro you hear so many stories and you never hear the backstory and not that you have to because at the end of the day a life was lost.”

Along side Smith was Bernita White, also a GS Alumna, who said she was walking to support those facing suicidal thoughts.

“I understand the transition of going through depression and for those who are feeling that they are alone and that there is no other way out,” White said.

The walk concluded with a releasing of doves to commemorate the lives of victims of suicide.

“The doves are a symbol of peace so we hope that any souls that have gone on before us that they are resting in peace and that we can have peace for that,” Martin said. “They’re also a symbol of hope so we can be encouraged to spread messages of hope to others that are struggling with mental health around us.”

The Out of the Darkness Walk also served as a fundraiser towards investing in new research, creating educational programs, advocating for public policy and to support survivors of suicide loss, according to the AFSP’s website. The walk raised a total of $5,430.

The University asks if anyone tells you they are thinking about suicide to not ignore them or minimize their message and to call the GS Counseling Center at (912)-478-5541.

If you are considering suicide yourself, the University asks you please talk with someone about it and get help by coming to the Counseling Center or call and speak with someone who can help you.

For more information about suicide prevention and awareness, click here.