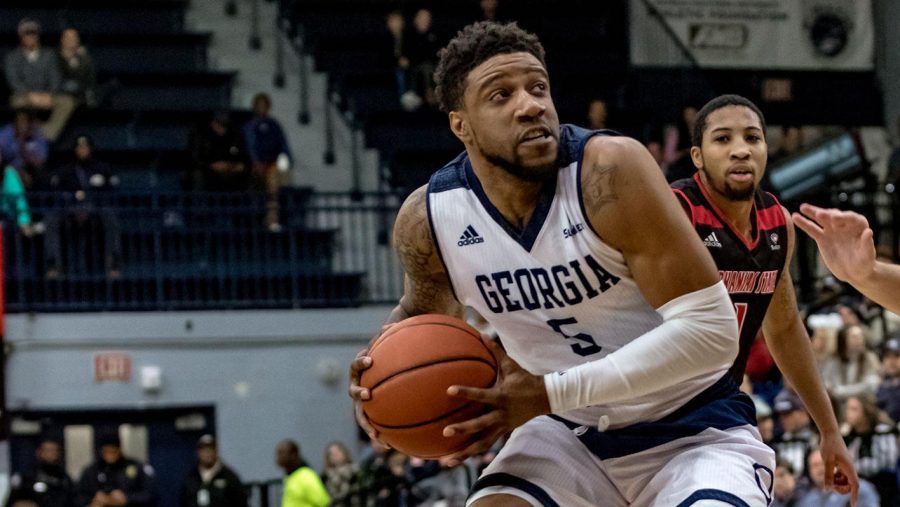 BJ Gladden is one six GS seniors playing in their final game in Hanner Fieldhouse Saturday against Troy.

To end the regular season, the Georgia Southern men’s basketball team will have a 2-game home stretch preceding the Sun Belt Tournament. These two games are against Sun Belt opponents South Alabama and Troy.

If they win both games, they are guaranteed at least the 3-seed in the tournament. However, with UTA, ULM, Troy, Appalachian State, South Alabama, and Coastal Carolina on their tail, they could end the regular season as a non-top 4 seed, meaning they do not get a bye in the first round.

This will be the first game for the men’s team since their victory over Georgia State Feb. 16. The game against South Alabama will take place at 7:30 p.m. on Thursday night.

While their home record is outstanding (11-4), their away record is atrocious (1-11). Going against a GS team with an 8-3 home record, this matchup does not speak well for the Jags.

Although the matchup does not look good for USA, the Jags did win their game against GS at home, squeaking out a 69-67 win.

The game against Troy will be at 5 p.m. on Saturday.

Like USA, they have a rough away record, having gone 3-9 on the road, making this game a sure disadvantage.

What makes this disadvantage even worse is that the Eagles won their away game against Troy earlier in the season.

It will also be Senior Day in Hanner for six Eagles.

GS is coming off a big win against Texas State, keeping them in 3rd place in the Sun Belt.

In order to keep this position, it is crucial that they win both games. As long as key scorers, junior, Tookie Brown; junior, Ike Smith; and senior, Mike Hughes can continue their offensive efforts while holding these two teams on defense, they should get a bye in the first round of the tournament.