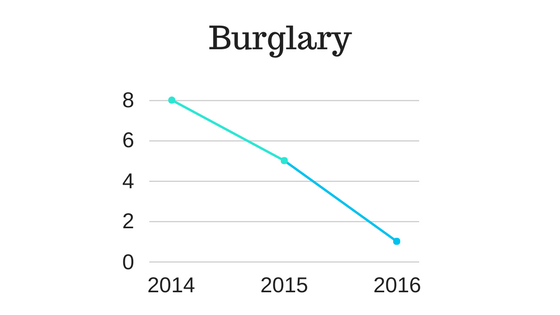 The Georgia Southern University Police Department displays crime statistics from 2014, 2015 and 2016 in its Clery Log.

The Clery Act requires all colleges and universities that participate in federal financial aid programs to keep and disclose statistics concerning certain criminal offenses reported to the local police or any official of the campus.

Here is a look at a few crimes reported to the UPD by the numbers.

The Clery log defines burglary as the unlawful entry of a structure to commit a felony or a theft.

According to the Clery Log, burglary incidents reported to the UPD have decreased from eight to one within the period of 2014 to 2016.

The Clery Log shows that there was a slight decrease in illegal weapon of two arrests to one for the possession of illegal weapons between the year 2014 to 2015.

However, the number arrested in 2016 for the possession of illegal weapon spiked to five.

The Clery Report defines rape as the “penetration of, no matter how slight, of the vagina or anus with any body part or object, or oral penetration by a sex organ of another person, without consent of the victim.”

GS’ annual rape statistics shows that there has been a reduction in rape offenses on campus from four to three between the year 2015 to 2016.

Dating violence is defined by the Clery Log as violence committed by a person who is or has been in a social relationship of a romantic or intimate nature with the alleged victim.

Dating violence includes, but is not limited to sexual or physical abuse or the threat of such abuse.

According to the Clery Report, reports of dating violence has increased from zero in 2014 to four in 2016.