Euthanizations of stray cats on the rise in Statesboro 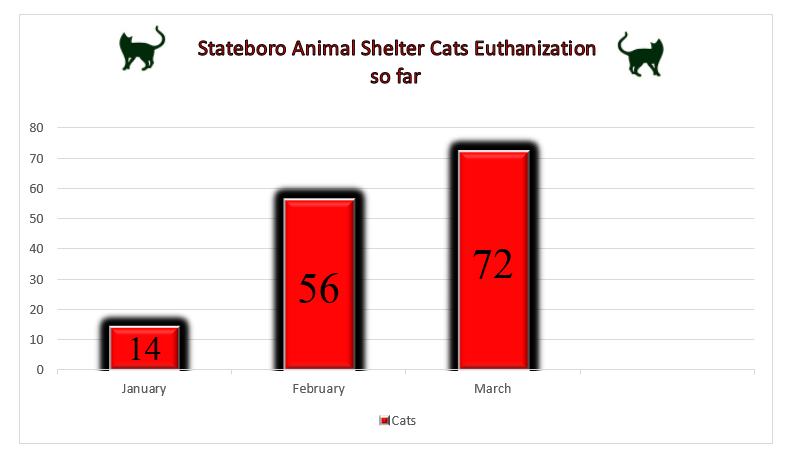 This over-population often leaves the shelter scrambling to accommodate stray cats. In 2017 the Statesboro Animal Shelter euthanized 453 stray cats with the highest number of euthanizations in December at 100.

Usually, the shelter will only put down cats who are aggressive or have health problems.

“As long as cats are friendly and healthy, we can foster them out,” Mitchell said. “We constantly get calls from the shelter to take cats like these.”

Mitchell said another problem for the strays are the people who feed them.

“Feeding stray cats just to feed them will only encourage them to stick around and reproduce,” Mitchell said. “Feeding cats without the intent of trapping and spading or neutering them encourages the problem.”

These cats may not seem like a problem, however, stray cats can cause health and property problems, Veterinarian Dr. Gary Thompson of The Blade said via email.

“Stray cats tend to live under buildings and sheds, under cars, and even in sewers, which can lead to destroyed property and possible injury for the cats,” Thompson said. “They can carry ringworm, hookworm, rabies and intestinal parasites that can cause harm to people and other animals if spread.”

The cats that are caught and sent to the animal shelters will usually have a good chance of getting fostered out through the Statesboro Humane Society.

On average, the animal shelter will have 35 to 40 cats fostered out, but the number continues to rise.

“Just last week two mama cats and their kittens were brought in,” Mitchell said. “It was a total of 12 cats.”

The volunteers of the Statesboro Humane Society do their best to contain the feline population low, but to create a lasting solution, they need help from the community and campus.

While shelter works with outside local rescue groups, like Fixing the Boro, to help as many animals as they can, the Humane Society is trying to start up a Trap-Neuter-Return project.

The project would pick up stray cats, allow cats to be picked up, spayed or neutered and returned to the property they were taken from without being sent to a shelter.

Mitchell said that similar projects have worked in many places all across the country but have yet been brought to Bulloch County.

For those who are able to foster, the Humane Society will pay for all supplies, including food. The only expense that they cannot offer are pet deposits for housing complexes.

The Humane Society is always in need of supplies and volunteers. Donations can be made on their website, or at their Retails thrift store.