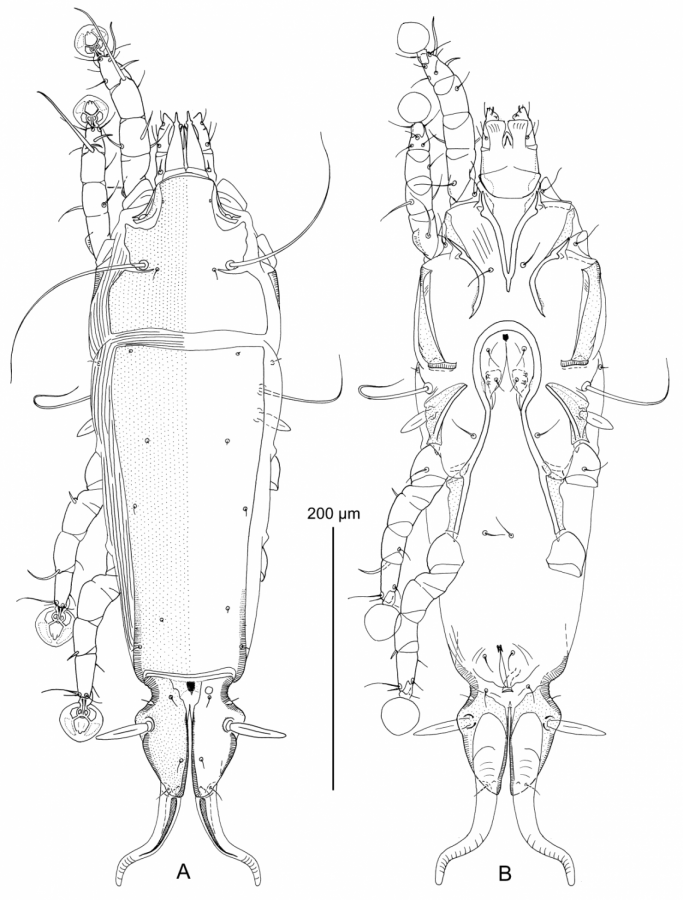 A picture of the mites, of the genus Amerodectes, found on campus.

Eight new species of feather mites have been identified on the Georgia Southern University campus.

These tiny mites of the genus Amerodectes, live only on the feathers of birds, and feed on oil and other body fluids of their hosts.

These particular mites were discovered on campus, professor Ray Chandler, Ph.D., of the Department of Biology at GS said.

They are not unique to campus, however, this is the first time they have been found on campus.

They were collected at various times between 2014-2016, though the actual paper describing the new species was published recently.

These little fellows are a big deal

The mites were collected from the feathers of common resident and migratory songbirds such as the Swainson’s Thrush, Wood Thrush, Worm-eating Warbler, Ovenbird, Common Yellowthroat, Chipping Sparrow, House Finch and Painted Bunting.

Given that the host birds are found here, the mites occur on the birds.

“New birds and mammals are rarely found. New mites, ants, insects, etc. are described more often,” Chandler said in a press release. “However, in a well-studied area like the U.S., especially on a college campus full of students, this is a rare event.”

Typically, a given feather mite species is restricted to one species of bird or a closely related group of species, Chandler said via email.

When deceased birds are found on campus, faculty in the Department of Biology, under a permit from the U.S. Fish and Wildlife Service, carefully preserve them and collect parasites, tissue samples and other potentially useful data. The goal is to gather as much data from each individual bird as possible.

“Although birds dying as a result of collisions with surfaces such as windows is a major issue everywhere, at Georgia Southern we are doing our best to make as much use of these specimens as possible,” Chandler said. “We never anticipated finding so many new species.”

Chandler said that there is the possibility that more hidden biodiversity will be found on our campus.

“More inconspicuous species like the feather mites could be awaiting discovery on campus,” Chandler said via email. “There is often a limited number of scientists with the expertise to identify them.”

For this study, Chandler collaborated with visiting professor Sergey Mironov, Ph.D., of the Russian Academy of Sciences. Mironov is an international authority on feather mites and will be visiting GS again in May.

A copy of the publication describing the new species can be found online.

Visit the Georgia Southern Biology Survey for updates on research and observations of the wildlife on campus.