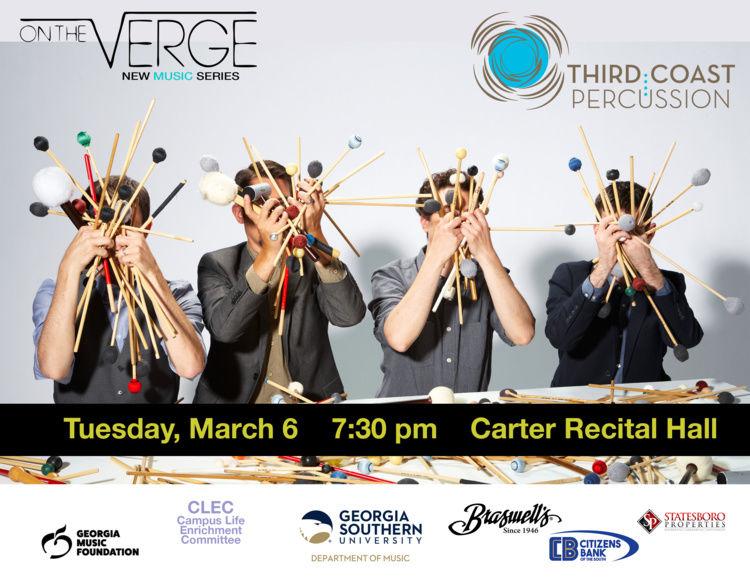 Grammy award-winning group Third Coast Percussion will give a free performance at the Carol Carter Recital Hall on Tuesday at 7:30 p.m as part of Georgia Southern University’s On The Verge music series.

The Chicago-based quartet, founded in 2005, is comprised of members David Skidmore, Robert Dillon, Peter Martin and Sean Connors, each of whom hold Master of Music degrees and have taught at various universities, according to the Third Coast Percussion website.

“A friend in high school convinced me to join the local youth symphony, and then I fell in love with classical music, and decided to go to college for music,” Dillon said in an email. “In college, percussion ensemble music and contemporary music were amazing experiences, and luckily I met some other great percussionists who also loved this stuff, so we started this group together.”

“[Winning a Grammy] was a totally surreal and insane experience,” Dillon said. “Third Coast Percussion had been around for 12 years, and a percussion ensemble had never won in the chamber music category before, so it felt like an accomplishment for all the percussion groups who’ve been working to champion this music for decades now. We also got to perform at the Grammy Premiere Ceremony with Ravi Coltrane. It was great.”

In addition to performing around the world, Third Coast Percussion is involved in community outreach, including activities for students on the Garrison School for the Arts and GS campuses Monday. Dillon said the day-to-day activities of his career are rewarding.

“Just having a performance that feels really great, or connecting with a group of school kids in a way that feels like you made an impact, or working with a composer and reading through really cool new music for the first time, or occasionally we get an email or letter from someone who tells us that we really made a difference in their life in some way or another, those are the things that make this really rewarding,” Dillon said.

“People should not miss this concert,” Dillon said. “There will be all sorts of interesting and beautiful sounds: drums, marimbas, tuned cowbells, Japanese singing bowls, amplified table tops. Every piece will be a new and interesting surprise.”

Admission for the event is free due to sponsorship from the Georgia Music Foundation, Braswell’s Food Company, Statesboro Properties and Citizens Bank, as well as the Campus Life Enrichment Committee and the College of Arts and Humanities at Georgia Southern, according to a press release from the Department of Music.

Dillon said, “I honestly think we’re a very unique performance experience that you don’t see every day, and there’s an energy and attention to detail we bring to our concerts that I think really make an impression on people.”