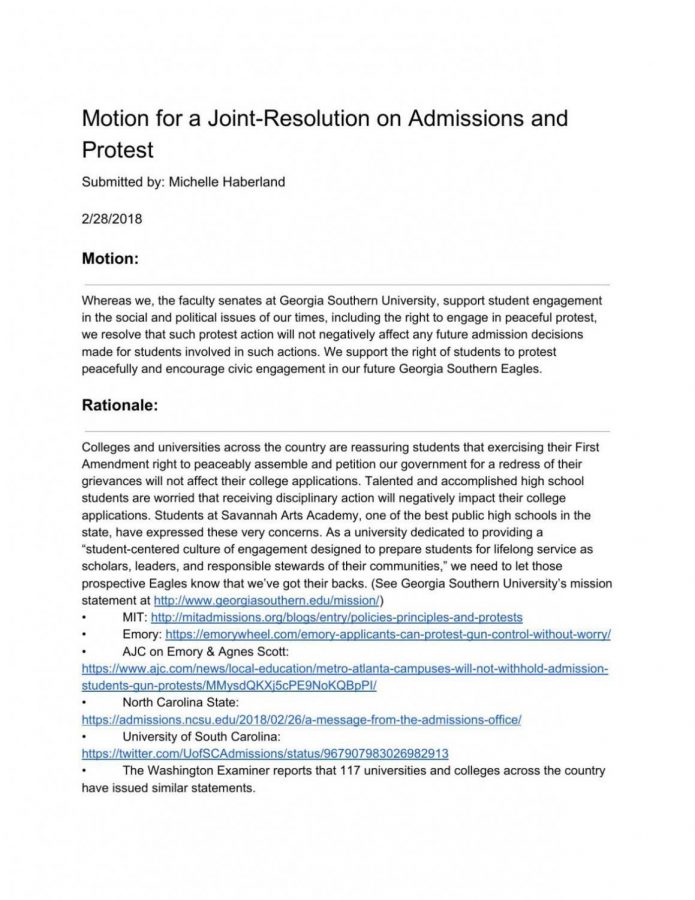 “As a university dedicated to providing a ‘student-centered culture of engagement designed to prepare students for lifelong service as scholars, leaders, and responsible stewards of their communities,’ we need to let those prospective Eagles know that we’ve got their backs,” the resolution reads.

Faculty Senate member Michelle Haberland put forth the joint resolution of admissions and protest at the March 6 faculty meeting after students across the nation expressing concerns that the planned walk outs and protests might negatively affect their college applications.

“A few faculty expressed concern that Georgia Southern was not among the many colleges that have explicitly stated that students who participate in protest will not be penalized in the admissions process,” Haberland said. “To my knowledge, the only colleges in Georgia that have issued statements like this one are private — Emory and Agnes Scott. The silence from public universities in Georgia does not serve us well as a institution.”

Haberland worked on the motion with Ned Rinalducci, a colleague from the Armstrong campus, and submitted it for inclusion on the agenda for the Faculty Senate meeting.

“The faculty at Georgia Southern, as represented through their Faculty Senate, wanted prospective Eagles to know that if they protest and receive disciplinary sanctions at their high schools, that action would not negatively impact their applications to Georgia Southern,” Haberland said.

According to the #NeverAgainColleges website 266 colleges and universities have reassured students that engaging in protest will not have any negative impacts on their college applications.

“Georgia Southern should join that growing list of universities and let high school students know that our university community values civic engagement,” Haberland said. “This is not a issue about being edgy, it’s about supporting student’s first amendment rights.”

“Our admissions office is able to either clear the applicant or pass it up for further review if it looks like it needs to be reviewed further,” Copeland said. “It’s really a case-by-case decision.”

The motion among the Faculty Senate passed with no opposition. A copy of the resolution can be viewed below.