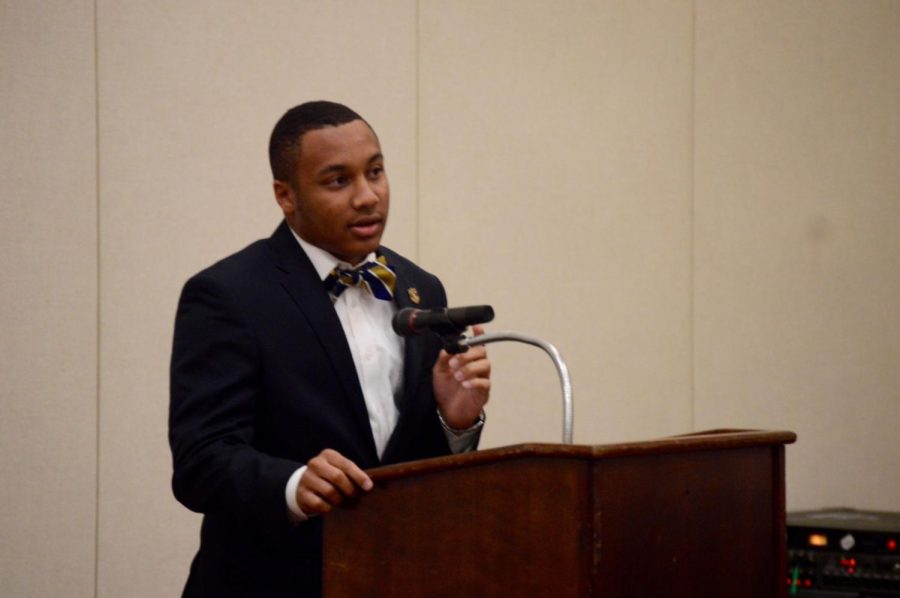 “We have to continue to work toward making sure our students are engaged, aware and understanding of the resources that they have while at the same time unify our students behind ideas and beliefs that we can stand on,” Steele said.

Steele said his platform is focused on bridging the gap.

“When I say bridging the gap, people see the natural gaps, the geographical maps and the obvious gaps,” Steele said. “Liberty isn’t at our backdoor. Neither is Armstrong. I think that is something serious that we need to focus on.”

Steele also said that  one gap on the Statesboro campus is that students are not familiar with what SGA is and what the organization does for the student body. Steele suggested that students should be incentivized for attending SGA meetings.

Joyner believes that the role of SGA President is to be an unbiased lesion for the GS community.

“All students should have a outlet for their voices and I feel like that is something that the president should give,” Joyner said.

Joyer said her and her team’s platform will follow three main points:

Joyner said that her staff want to keep implementing the Vision 20/20, which allows students to bring forth their more pressing concerns to the Senate. She also wants to start live streaming the weekly meetings to make the senate meetings excisable to all Georgia Southern campuses.

Advocacy on all of GS’s campuses

The candidates were asked about how they would go about being an advocate for not only the Statesboro campus, but for all of the Georgia Southern campuses.

Steele’s response was that advocacy could be done through self awareness.

Joyner spoke about her work on the Armstrong campus during the past two months.

“I have a whole team together on their campus that I’ve been working with,” Joyner said. “They’ve been educating me on their type of students, what their students respond to how their students like things to be done.”

Joyner also said she attend monthly meetings on other campuses and would have live streamings of SGA meetings so that all campuses could stay updated on SGA decisions.

The candidates were asked about their thoughts on four main concerns presented by GS students: college affordability, sustainability, mental health and sexual assault.

Steele said college affordability relates with transparency in how student money is spent.

Steele’s response towards sexual assault was to work toward solutions on prevention and representation. Steele said that SGA should have continued dialogue with the student body about sustainability and mental health.

Joyner began her response with the topic of sustainability on campus and recent sustainability resolution that was passed by the SGA to continue strides towards a more sustainable campus.

In response to mental health and sexual assault, Joyner said it was time to start talking about both topics.

“Far too often we just let it slide and it’s time to start talking about it,” Joyner said.

Both candidates were asked what their personal definition of diversity, inclusion and fairness. Joyner was first to respond.

“I feel that my personal opinion of what diversity is is it encompasses so many beautiful aspects,” Joyner said. “It incorporates so many students that have very unique backgrounds its time for them to have their voices heard.”

Joyer added that as SGA president she would educate herself daily on diversity and encourage students to share their own experiences through the SGA.

Steele said that SGA needs to “keep the ball rolling” with providing resources to promote diversity, fairness and inclusion.

“They’re issues that people live every single day. We would hope that fairness and diversity and inclusion would be synonymous with equality but its not.”

Voting opens April 2 at 12 a.m. and closes on April 4 at 11:59 p.m.Students may access the voting through mygeorgiasouthern.edu.

To see a live stream of the debate, visit the GS SGA Facebook page. of the event click here.