A season in review: women’s basketball 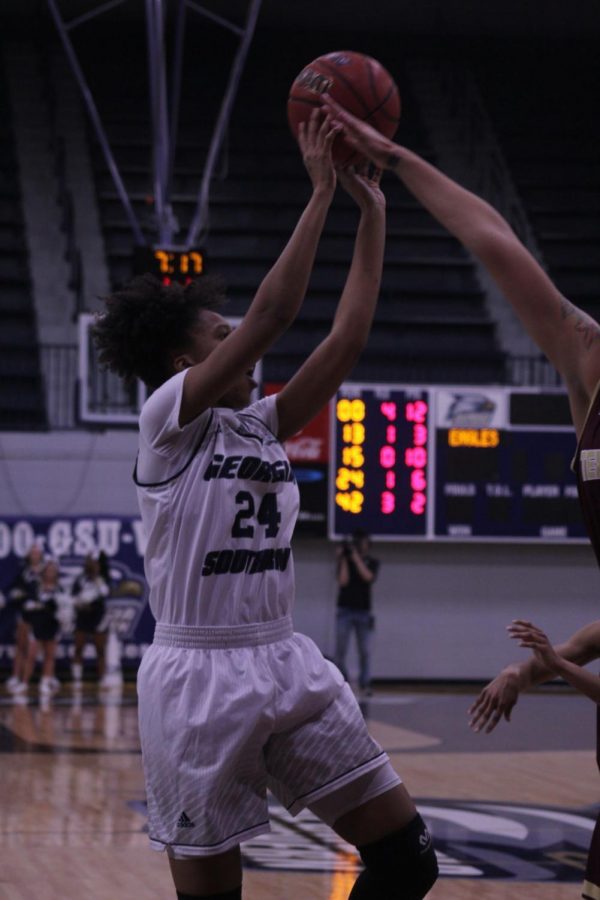 In a game in which they were tremendous underdogs, the Georgia Southern Women’s Basketball Team fought long and hard against Louisiana, and set out to prove they belonged in postseason play.

Their valiant efforts in the first round of the Sun Belt Tournament fell just short, as the Eagles lost a heartbreaker to the Ragin Cajuns.

The game swung back and forth, but after three overtimes, Louisiana came out on top 88-81. The loss on Tuesday night ended what was a short-lived postseason for the Eagles, who entered the tournament as the eleventh seed.

The defeat, although devastating for obvious reasons, finally marks the end of a long and frustrating 2017-2018 season for the Eagles.

Putting together just five wins in their thirty games of work, the team has plenty to work on in the upcoming months, and their young core is quite an encouraging sight for the program, especially with the season coming to an end as it did, with the squad showing tremendous signs of heart and hustle on the floor.

The ride throughout the 2017-2018 season certainly wasn’t the prettiest to watch. The Eagles struggled to get any momentum going during any point in the season, going on losing streaks repeatedly, including wrapping up the season by dropping seven games in a row, but it seemed as if the team never quite lost hope of making improvements.

Posting a 2-16 conference record, Georgia Southern just simply struggled to get it done on the court. Due to no lack of effort, the young and inexperienced team showed simply just couldn’t contend with higher caliber opponents.

In the coming months, Georgia Southern will only be losing three players to graduation in the offseason, guards Trellanie English-Lurry, Alexis Foulks, and Jakayvea Akins who all three held a significant role in the Eagles’ game plan throughout the year.

While these teammates will obviously be missed both on and off the court come next season, it’s impossible for the Eagles not to look at the positive sides of having a young and experienced team to follow in their footsteps.

Even though as a unit they collectively struggled to gather wins in 2018, the freshman and sophomore players on the roster gained valuable on-court experience and knowledge throughout the entirety of the regular season and their lone postseason matchup, and it’s hard to imagine that head coach Kip Drown will not use that strength to his advantage in preparations for the 2018-2019 season that will be here before you know it.

Following the loss that ended their season Tuesday night, Drown said it was a huge boost of confidence for he and his young team to see that they can go in and compete with teams of a higher caliber. He went further by saying “I think it’s something we can grow off of.”

Two of the young stars that will be returning for Drown and the Eagles next year will be the pair of sophomore standouts Alexis Brown and Nakol Franks, both of whom averaged a team high of nine points per contest. Now entering their third calendar year with the program, these two are expected to be the team leaders on and off the court.

The combined elements of having more experience on the hardwood and the team’s utter passion for improving their game this over long, difficult stretches is beginning to look like this young team is on a trend in the only direction possible from their previous campaign- up.

Entering the Sun Belt tournament this season as the eleventh seed, out of only twelve teams, was undoubtedly disappointing for the Eagles, but the expectations for Drown and company are on the rise, and the now experienced stars of the squad are in prime position to wreak some havoc in conference play come the 2018-2019 season.