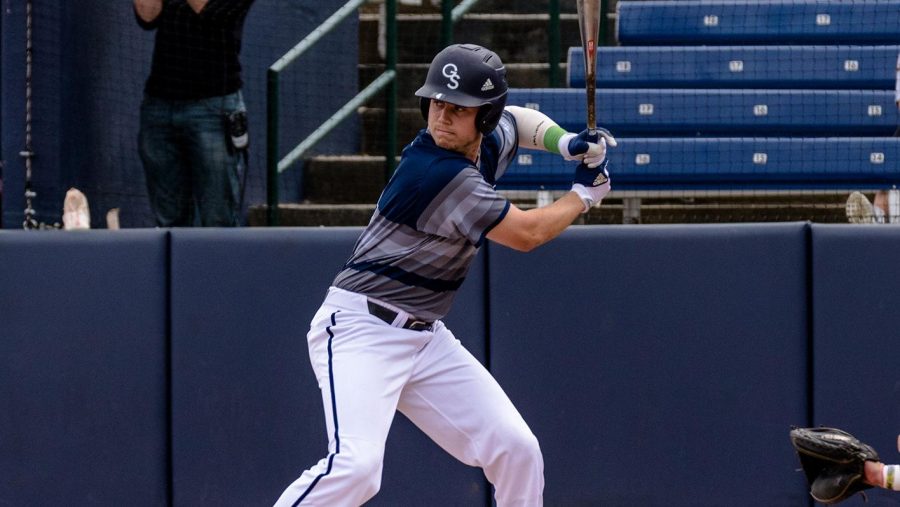 With a swing of the bat in the second game of the series, sophomore Mason McWhorter hit the ball way back over the centerfield wall to record his first career grand slam.

More importantly, the four run score gave the Eagles momentum to complete the sweep against a poor App State team.

“I got that 3-2 pitch that was really good to hit,” McWhorter said. “I just drove it out of the park.”

The grand slam was the highlight of a pretty flawless series against the Mountaineers of App State.

first run of the game came in the second inning by way of a wild pitch and aggressive baserunning from sophomore Mitchell Golden. When Vaccacio turned to try and pick off freshman Christian Avant at first, Golden made way for home plate and made it to make the game 1-0.

Unlike other games from this season the pitching staff was able to keep the Mountaineers scoreless and an RBI from McWhorter to score Curry in the sixth would be all the Eagles needed to secure the win.

Saturday was a doubleheader and featured two games where the offense from the Eagles was on full display.

Again two and a half scoreless innings, McWhorter went to work and delivered a the first GS grand slam of the season.

“What I’ve been working on all week is just having really good at bats,” McWhorter said, beaming. “After I hit it, I knew it was gone.”

While the four runs were all the Eagles needed, the scoring didn’t stop there.

In the bottom of the fifth, freshman Noah Searcy hit a booming two-run homerun scoring McWhorter to make it a 6-0 game.

The Eagles would go on to win the first game of the day 7-1 after a Mitchell Golden RBI double.

Game three got off to a rough start for freshman RHP David Johnson as the Mountaineers took their first lead of the series.

Johnson loaded the bases and allowed two runs in the top of the second. GS responded with a run in the bottom of the second with a throwing error to score Searcy, unearned.

The Eagles tied the game at 4 in the bottom of the fourth after Mason McWhorter’s second homerun of the day, Blake Simmons’ RBI single and a fielder’s choice.

It was in the sixth inning where the Eagles won the series with a five run inning to make it a 9-4 game.

Two more runs in the eighth gave junior RHP Cole Whitney his second win of the season with an 11-4 win.

This is the Eagles’ second series sweep of the season (Fairield) and their third sweep of App State since the teams joined the Sun Belt.

GS will travel to Atlanta Tuesday to take on Georgia Tech before returning home for a three game series against Coastal Carolina next weekend.

The Eagles took two wins in last season’s series in Conway. Coastal and GS are first and second in the East Division, respectively.

“We have good momentum,” Mason McWhorter said. “We’ve got a good shot to beat (Coastal).”