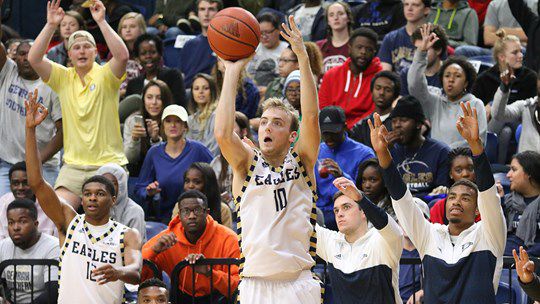 Thursday night’s men’s basketball game was one of shifting momentum and careless basketball for 30 minutes. While the game was exciting and the players gave their all, the Eagles fell to visiting ULM in overtime 66-64.

The game was a back and forth affair with 13 lead changes and neither team had a lead by more than five.

Both teams played very sloppy in the first half resulting in a halftime score of just 29-25 with the Warhawks up.

One of the key components to the momentum shifts was the play of senior guard Jake Allsmiller.

In the first half, the senior went 0 for 4 from behind the arc and his frustration was evident. For the majority of this first half, the crowd was uninvolved and the team was overall sluggish.

Coming out of the locker room, Allsmiller hit two huge threes to give the Eagles the lead. The crowd erupted and the team locked down on defense and had lengthy, smart possessions.

ULM’s Travis Munnings couldn’t be contained though as he continually got behind the Eagles and finish with 26 points and 20 rebounds.

When the game came down to the wire, it was Jake Allsmiller who was sent to the line to extend GS’ lead. After going 1 for 2, the Eagles were up 58-56 with 28 seconds to go.

ULM went down the court and was able to muster up a wild layup to send the game into OT.

All hope was lost in overtime when Sam McDaniel got away and drained a 3 to take a one point lead before making a free throw.

A last ditch heave from senior guard Shawn O’Connell to Mike Hughes fell short as the Eagles would lose their second game in a row.

Jake Allsmiller and Ike Smith led the Eagles in scoring with 15 apiece. Smith also came down with 7 rebounds, but Montae Glenn led in boards with 10.

The Eagles will host previously unbeaten Louisiana Saturday night at 5 p.m. in Hanner for this year’s Pack the House in Pink game.