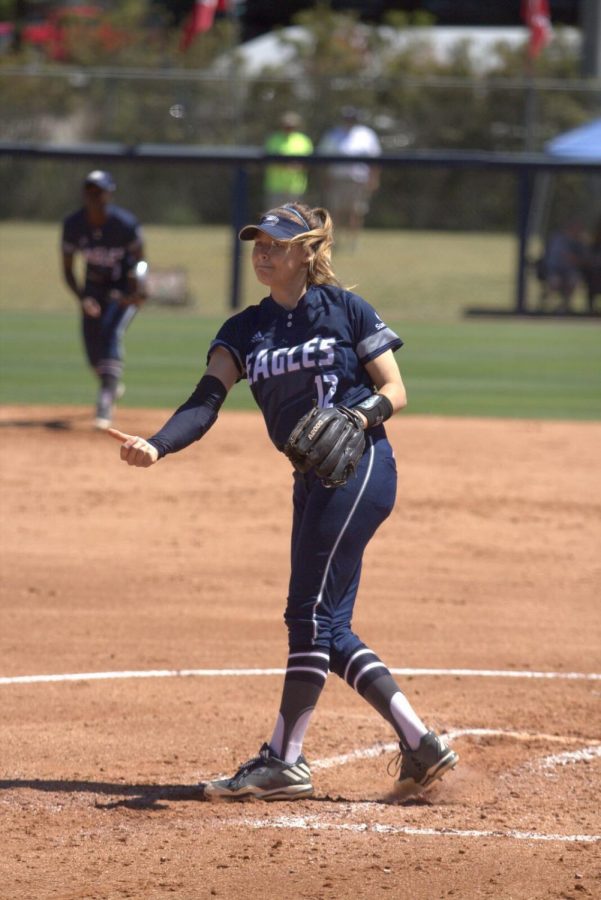 Senior RHP Heather Felt was called in for relief in the lone loss aganst ETSU Sunday.

Over the weekend, the Eagles played four games, including two against Austin Peay and one against both Murray State and ETSU, all of these being non-conference matchups.

GS looked impressive, as their offense and defense seemed to click well early in the season, scoring 2 more runs than they gave up over 28 total innings.

They went 3-1 over the weekend, having a good start to their season.

Until the bottom of the second inning, both defenses held their own, giving up a double each. Back to back strikeouts to start the bottom half of the inning indicated that the game would continue to be scoreless. That was until back to back singles set up a 3-run blast by sophomore leadoff hitter, Mekhia Freeman.

Over the next two innings, the Govs chipped away at their 3-0 deficit, scoring a run in each one, bringing the game to within 2-0.

After a scoreless top of the 5th inning and a rain delay to follow immediately after, the Eagles defense gained momentum again and finished the game strong.

Senior, India Davis, and Mekhia Freeman led the offense. Davis was the only Eagle with multiple hits and scored a run. Freeman had all 3 RBIs for GS, all off of one clutch homer.

The Eagles started off the game fast, getting 2 runs in each of the first two innings. Sophomore, Shelby Wilson was responsible for the first two runs of the game, bringing in 2 runs with a double into the right-center field gap.

In the second inning, Mekhia Freeman and Shelby Wilson both singled in a run each, giving GS an early 4-0 lead.

The game was scoreless until the bottom of the 5th inning when Wilson once again, singled in a run following a triple from senior, Alesha Mann.

In the top of the 6th, walks killed the Eagles, setting up room for a 4-run inning from the Racers. However, this was not enough to overcome the 5-4 deficit, and through a scoreless 7th inning, GS came out with a victory.

The offense was led by Shelby Wilson, who was responsible for 4 of the team’s 5 RBIs, getting at least one every time she stepped to the plate.

On Sunday morning, the Eagles took on Austin Peay for a second time in two days.

For the third game in a row, the Eagles hit first and early. The scoring started by a 2-run double in the 1st inning by junior, Logan Harrell. Two batters later, junior, Hannah Farrell drove in a run of her own with a double.

The next round of scoring came in the 4th inning. Austin Peay put up their first run of the game in the top of the inning, however, a groundout by Alesha Mann would void that run in the bottom half of the inning.

The Governors scored one more run in the 6th inning, but that was all, and the Eagles came away with a 4-2 win.

This matchup between the Buccaneers and the Eagles proved to be a scoring fest, this time with ETSU jumping out to the early lead.

Until the 4th inning, the Bucs held a 2-0 lead. Then, with nobody on and none out, Hannah Farrell stepped up to the plate and delivered a solo homerun. The following inning, Shelby Wilson tied the game up with a solo shot of her own.

ETSU responded almost immediately, proving to be a fatal blow to the Eagles, despite another Farrell homerun and sacrifice fly to go along with a Logan Harrell RBI single.

The power is there for the Eagles. Over the weekend, 4 homeruns and a total of 13 extra base hits were recorded.

Shelby Wilson looks great so far, recording 6 hits, 5 RBIs, and a homerun over 10 at bats. Also, Hannah Farrell is looking impressive. Despite her .250 average, her 2 homeruns stood out and indicates that her power is there early in the season, which could be very useful for GS.

The pitching is also looking good. The team ERA is a 2.50, despite giving up 16 runs in 4 games. Errors hurt the Eagle defense, but as it is early in the season, they have time to work on that.

On Friday, the Eagles will travel to Madeira Beach, Florida to compete in the Emu Madeira Beach Spring Invitational. Their first game will be at 4 PM against Jacksonville State.