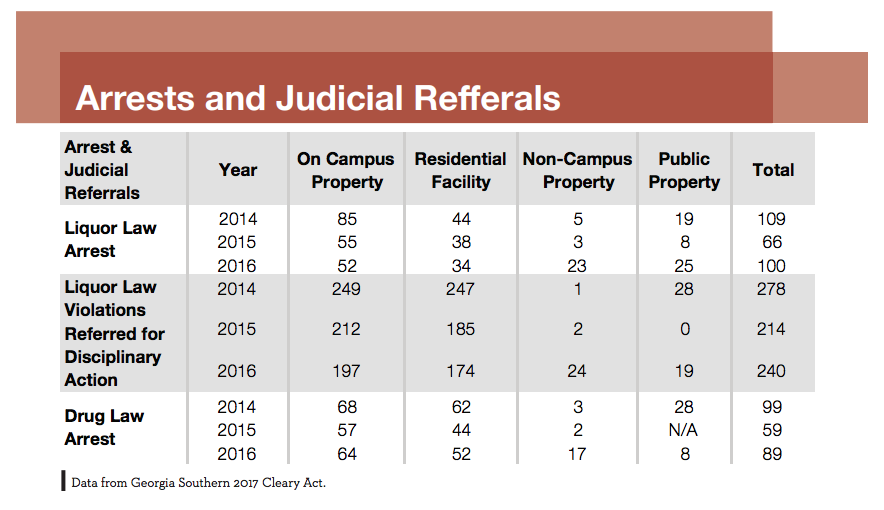 " />
George Andersen and Andrea Curtis and

During the spring of 2016, Paul Smith was arrested for the fifth time after another liquor law violation in Statesboro. Smith was one of 192 to be arrested for liquor violations between the years 2014 and 2016 and one of 658 to be referred to disciplinary action for alcohol within that time frame, according to the 2017 Annual Clery Act report.

In recent years, it has become harder for underage students to get away with underage drinking throughout the state of Georgia due to Michael’s law, which was put in place after the death of Michael Gatto, who was a Georgia Southern freshman at the time of his death.

On Aug. 28, 2014, Michael Gatto was out drinking at a former Statesboro bar, Rude Rudy’s, when he was assaulted by an off-duty bouncer, Grant Spencer. Medics rushed Gatto to Savannah in an attempt to save his life. He was pronounced dead the following afternoon.

Michael’s Law, enacted July 1, 2015, has prevented anyone under the age of 21 from working in or entering a bar in the State of Georgia. For some, this means extra security. For underage drinkers in the state of Georgia, it means a higher risk of getting caught.

“I personally think they [police] are overly focused on underage individuals consuming alcohol,” Chad Rimsek, a bouncer for The Rusty Tavern and Gnats landing, two Statesboro bars, said, “Also, overly concentrating on issuing MIPs [minor in possession] due to the pressure being placed on local police forces due to the incident which led to Michael’s law.”

While it was not found that police are directly targeting underage drinkers as Rimsek claims, the numbers indicate a spike in arrests and violations. Between the years 2010 and 2012, there were 102 alcohol related arrests on campus, according to the 2017 university annual security report issued by university public safety. That same report indicated that between the years 2014 and 2016 that there were 192 arrests, nearly doubling the number from before the initiation of Michael’s law.

Laura McCullough, chief of police for the university department of public safety, said that no change in protocol has happened since the law was enacted.

“Since this particular law impacts businesses serving alcohol mostly, it does not have a direct impact on campus,” McCullough said in an email. “We still handle any alcohol incident the same as we did prior to this particular law.”

Smith, a marketing student at Georgia Southern, has his own perspective and experience with how local police work, and he, along with Rimsek, believe that they target underage drinkers as a way to make money.

“The best word I would use to describe Statesboro P.D. would not be corrupt, but misdirected or misguided,” Smith said. “SPD is focused on underage drinking versus like serious crimes and I guess like traffic tickets.”

The impact that Michael’s law has had does not stop at Georgia Southern. Between the years 2010 and 2012, University of Georgia has reported 472 minor in possession charges according to the University of Georgia Police Department crime statistics report. That same report showed that between the years 2014 and 2016 that there were 668 reported minor in possession violations. These numbers, while slightly less drastic, change at a similar rate to Georgia Southern for before and after Michael’s law was put into effect.

Ashley Greene, a business student who transferred to the University of Georgia from Georgia Southern, said the law not only affects underage drinkers, it affects employees.

“I do have older friends though who had to lose their jobs at bars once the law went into effect, as they were working in the bars under 21 which Michael’s law prohibits,” Greene said.

However, many still feel that the law has only begun showing its effects and that this is only the beginning.

“Michaels law has dramatically altered Statesboro and Georgia Southern University there is no denying that fact,” Rimsek said. “As a student graduating soon and a bouncer at two bars I feel the effects will continue to be felt for years to come.”