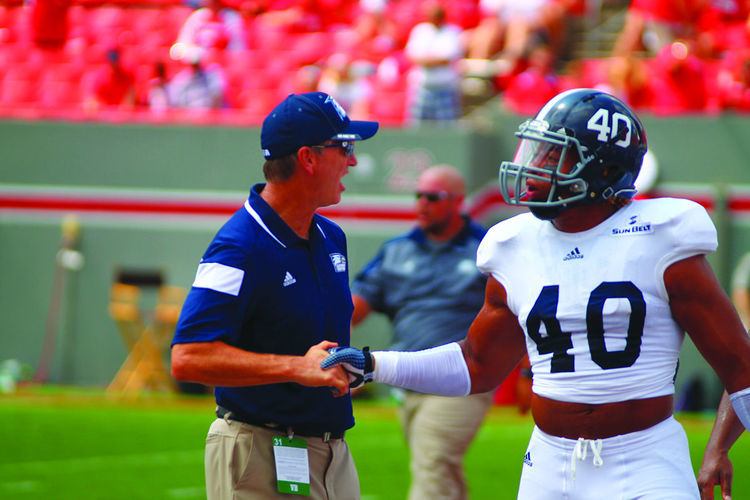 Jackson played at Georgia Southern from 2011 to 2014. Photo by Ryan Woodman.

According to an Indiana State Police press release, 26-year-old Jackson and 54-year-old ride sharing operator Jeffrey Monroe were killed Sunday morning after being struck by a suspected drunken driver along Interstate 70.

From walk-on to two year starter on defense to NFL starter with the Indianapolis Colts, Jackson left behind a career on and off the field that will be missed by all.

In 2014, the GS Eagles went 8-0 in Sun Belt play, earning them conference champions. This was Jackson’s senior year where he had his best season of his career, awarding him First Team All-Sun Belt honors. Jackson had a career high 100 tackles, a forced fumble and an interception.

After his remarkable senior campaign, Jackson was invited to the Medal of Honor Senior Bowl in Charleston, SC. He finished with four tackles including a huge tackle for loss in the showcase.

Jackson wasn’t invited to the NFL Combine, but showed up on his Pro Day with a 4.80 40 yard dash and completing 30 reps of 225 pounds on the bench press. He was signed by the Arizona Cardinals as an undrafted free agent, but was waived right before the season. He was then signed to the practice squad by the Indianapolis Colts, where he would spend the rest of his athletic career.

Jackson played in all 16 games for the Colts in 2016 and started in 8 of them. The 24 year old recorded 66 tackles for Indianapolis.

An excerpt of a statement by the Colts reads, “We were heartbroken to hear the news of Edwin Jackson’s passing. Edwin was loved by all in the Colts organization.We admired his outgoing personality, competitive spirit and hard-working mentality. He was well-respected among all with whom he crossed paths, and he will be greatly missed in our locker room and throughout our entire organization.”

Jackson also participated in charity works including the Riley Hospital for Children’s holiday caroling in Dec. 2017, and the Huddle for Peace event he and his fellow Colts participated in with the Indianapolis Metropolitan Police Department in Nov. 2017.

GS head football coach Chad Lunsford offered his thoughts and condolences about the life of Jackson on gseagles.com.

“To learn of the news of the untimely passing of a former Eagle causes great sadness and hurt,” Lunsford said. “Edwin Jackson represented not only Georgia Southern but also how a young man should live his life. He earned everything that he was given and has left this world way too soon. Our thoughts and prayers go out to his family, friends, loved ones and teammates. He will be missed.”