Redemption on the rise 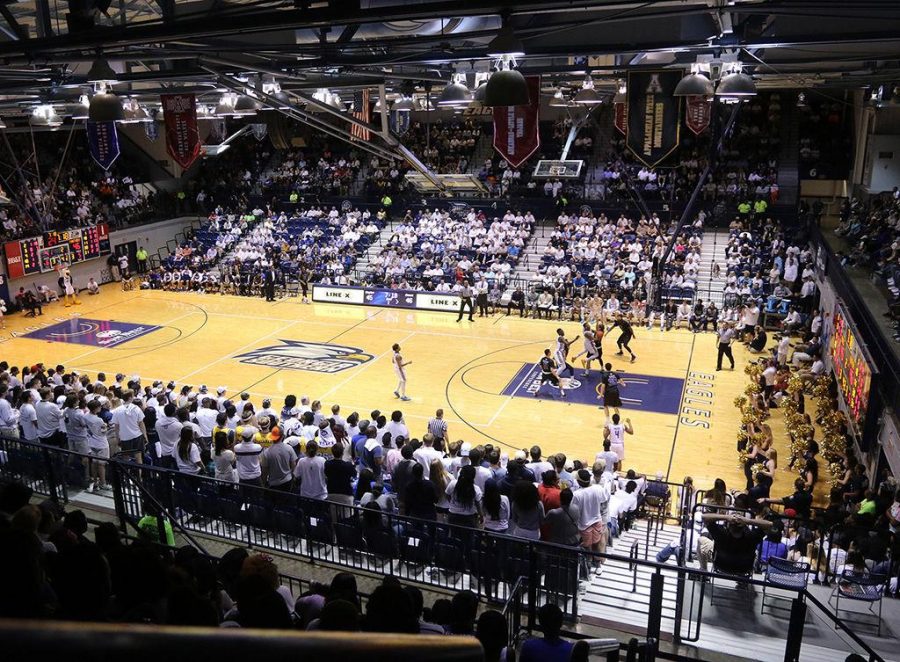 GS Athletics had issued a whiteout for Friday's game. Tip-off is set for 9 pm.

Since the two teams met in Atlanta a month ago, Georgia Southern and Georgia State have gone in different directions.

GS has gone 2-4 since Jan. 20 and GSU has gone 5-1 with their one loss coming this past Saturday in overtime against ULM.

The Eagles have fallen into a 3-game losing streak with two dejecting home losses to Louisiana schools.

When the two teams played in front of a sold out GSU Sports Arena, the two huge differences were the field goal percentages from the floor and the home court advantage.

The home team shot an impressive 50 percent while the Eagles shot a disappointing 34 percent from the field. It’s foolish to think of an upset while shooting those numbers.

Fans have to remember though, that scoring leader junior point guard Tookie Brown didn’t play in that game. The junior averages more than 20 PPG in Sun Belt play and last season he averaged 20 points against the Panthers in two meetings.

He is also coming off a phenomenal 29-point effort against Louisiana where all 29 points were in the second half.

Brown is no stranger to these big moment performances, whether it be nearly 30 points against the conference leader or hitting the game-winning three against Little Rock. Tookie will need to have another strong outing if the Eagles hope to win.

Another aspect that the home team will need to capitalize on is on the boards. In the first matchup, Montae Glenn led both team in rebounds with 11 total rebounds.

Games this season have seemed to go with how the junior forward goes. The Eagles have more success when he does well on the boards.

Glenn will be in a battle Friday though against former Sun Belt freshman of the year D’Marcus Simonds. When the Panthers really started to break away last month, they were led by Simonds who had 24 points and 10 rebounds.

Though he’s best in his dunking and driving, the true sophomore went 0-2 from three point range. If the defense can keep Simonds out of the paint, their chances go up greatly.

Finally, the deciding factor Friday night comes down to the atmosphere.

It will be Friday night, a white out and probably end up being sold out.

“Hopefully, [the crowd] gives us another chance,” Coach Mark Byington said. “Hopefully, everyone comes out.”

There is such a difference in environment when the crowd is involved. The first five minutes of the game against UL were incredible because of the resounding roar the fans gave. It fed into the playing of the team and the 6-0 start.