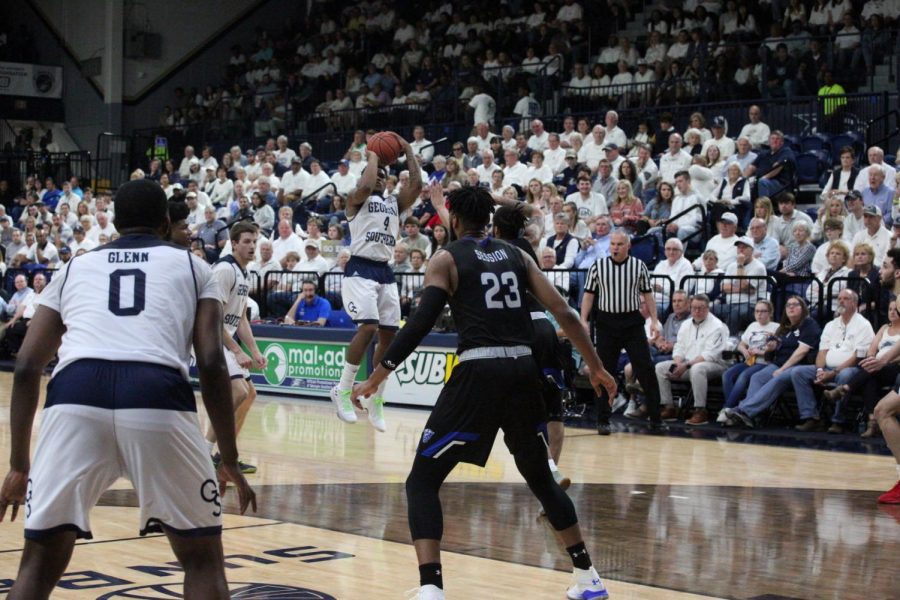 The Georgia Southern men’s basketball team goes on a road trip to Texas this week, to face off against two conference opponents, UT Arlington and Texas State.

The Eagles will visit the UTA Mavericks on Thursday, Feb. 22, in hopes to approve their 8-6 conference record. The two teams have already met once on the court this year in Statesboro, where the Eagles took down the Mavericks by a score of 74-59.

UTA enters this game following a road stretch where they lost back to back games to Louisiana Monroe and Louisiana. The Mavericks are trying not to fall too far behind in conference standings, as they currently hold the 7th seed, 4 back of the Eagles.

In their previous meeting UTA’s leading scorer, Kevin Hervey, had his way with the Eagles’ defense, putting up 29 points while grabbing 8 rebounds. A large contributor to outcome of the game will be if Georgia Southern can slow down Hervey, who averages over 20 points per contest.

On the second game of their road trip the Eagles will head to San Marcos, Texas to square up against the Texas State Bobcats. These squads have also faced off on the hardwood once this year, where the Bobcats squeaked out of Statesboro with a 62-61 win.

Revenge is expected to play a large part in this contest for the Eagles, facing off against a team that came onto their court and took the win in heartbreaking fashion, hitting a clutch free throw to put them ahead with just a few seconds on the clock.

The Bobcats though, have struggled since that meeting with Georgia Southern back in January. They have lost their last 6 games, and play host to a dangerous Georgia State team Thursday night before the Eagles come to town.

Georgia Southern is coming off perhaps their best performance of the year in a huge win over in-state rival Georgia State. The Eagles look to continue with their momentum into the road trip this week, and try in climb up in the Sun Belt standings, where they currently sit at 3rd place.

Tip-off against the Mavericks Thursday night is set for 8 p.m. and Saturday’s game against Texas State is scheduled to begin at 5:30 p.m.