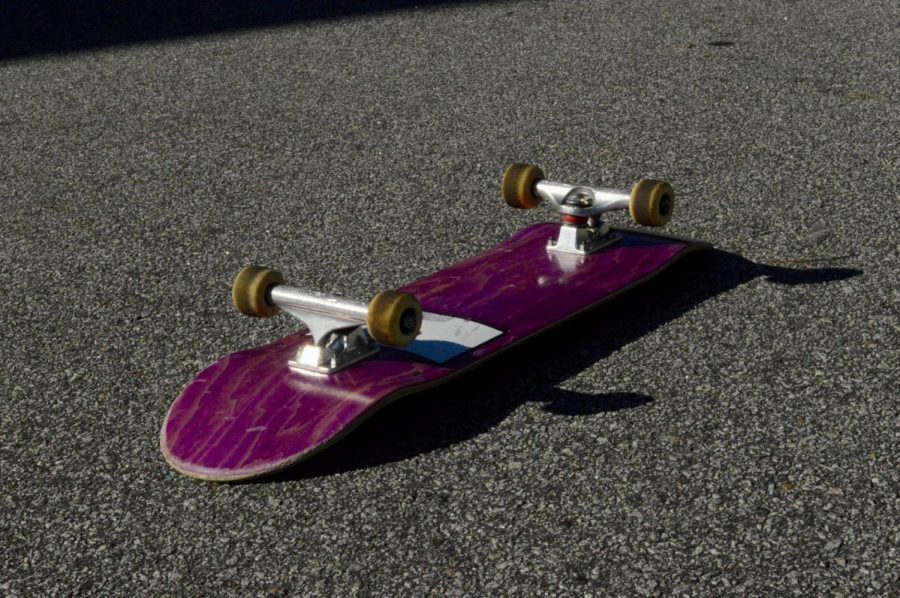 There are few places to skate in Statesboro, according to Mendes.

In the bustling eastern corner of the Georgia Southern University campus, daily patterns emerge. Students walk in droves to the Russell Union or the Dining Commons for lunch, and the blue and gold route buses cycle through with dozens of passengers. Meanwhile, skateboarders practice their moves by a bus stop.

On a sunny Thursday afternoon last week, two students filmed each other skating and performing tricks on the street between the Centennial Place residence halls and the Dining Commons. These are their stories.

“Every weekend, I would go to my local skatepark back at home, rain or shine. It was great. I’d say [that I have been skating] 9 years now,” Mendes said.

“It was like my second day here. I was shy as hell,” Mendes said. “All I see is five or six skaters here, and I was like, ‘Thank God.’ It’s nice to finally meet some people here that skate.”

Soon, Mendes joined a small community of skaters on campus, many of whom often skate on the street between the Centennial Place residence halls and the Dining Commons.

“We all have a group chat,” Mendes said. “We call it Skatesboro.”

The Skatesboro group chat, comprised of around 15 members, is where Mendes said the skating community makes plans together, including skating on campus and in downtown Statesboro on Main Street.

Brandon Lewis, a friend of Mendes and a sophomore computer science major, is another member of the skateboard community on campus. He reignited his skating pastime when he saw people skating on campus.

“When I came here, I just saw people skating, and I was like, ‘All right. I left my board at home. I’m gonna get back into skating,'” Lewis said.

Lewis said he befriended other skaters with a classmate.

“I had a class with this dude who used to skate… He brought one of our other friends out here, and from there, we just saw other people skating. We talked to them, they talked to us. And then we made the [Skatesboro] group chat,” Lewis said.

Lack of options for local skaters?

When asked if the skateboarders on campus ever had difficulty with the University administration or law enforcement while skating, Mendes mentioned just one place where he knew people had been discouraged from skating.

“At the Rotunda… That’s the only place we’ve ever really gotten kicked out of a place,” Mendes said.

Lewis, on the other hand, had a bit more experience with being told not to skate in certain spots on campus.

“I got kicked out at the loading dock behind Chick-Fil-A and the science building once,” Lewis said. “We skated a bench near Watson Hall. We’re not supposed to. We’re just going to leave if they ask us to leave.”

Overall, Lewis and Mendes agreed that there are few places nearby where students can skateboard, aside from the popular spot beside the Dining Commons, formerly known as Landrum.

“There isn’t much to skate in Statesboro. All we really have is in front of Landrum, and we’ve tried the Rotunda – it doesn’t work out for us,” Mendes said. “We go to a skatepark, it’s about 45 minutes away from here… It’s called Pembroke Skatepark.”

Pembroke Skatepark was partially funded by a $5,000 grant from the Tony Hawk Foundation about ten years ago, according to the foundation’s website.

“Every skatepark is the result of a partnership between youth, government and local civic organizations,” the Tony Hawk Foundation wrote on their website. “In spite of their rough edges, skateboarding youth often prove to be incredible advocates for the things that are important to them…”

According to a 2014 article from The George-Anne, the City of Statesboro once had plans to build a local skatepark through a project called the “‘Boro Skatepark Project.” The project received funds from both the Tony Hawk Foundation and the Rob Dyrdek Foundation, according to the article.

However, the ‘Boro Skatepark Project does not appear to have come to fruition. According to a June 2016 Connect Statesboro article, the project “hit a couple of bumps and is set for the future rather than the immediate present.”

Statesboro-Bulloch Parks and Recreation has been reached for comment on the ‘Boro Skatepark Project.

Sherrie Zeigler from Statesboro-Bulloch County Parks and Recreation said in an email, “Currently the County is obligated to multiple building projects (SPLOST Projects) and has limited funding for additional capital building requests. In the past local/community, Skate Park supporters tried to organize fund raisers to build a park, however, the project never gained momentum.”