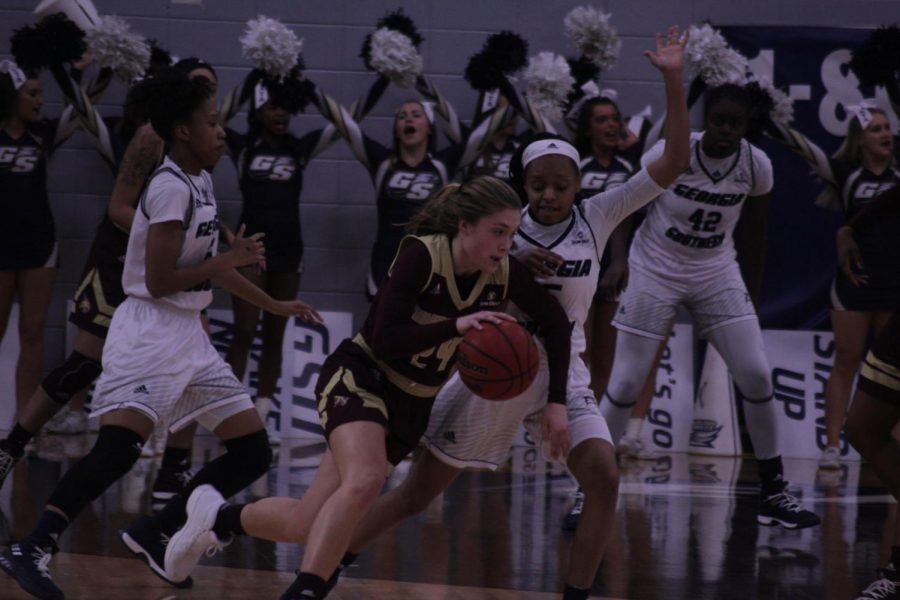 After a close 10-point loss to the Ragin’ Cajuns, the Eagles prepare themselves to play rivals Georgia State this coming Saturday at Hanner Field House.

This Saturday, the Eagles look to have a change in that.

Although they’ve had a particularly poor season of 5-19, as of recent the Eagles have been heating up.

In the past two weeks the Eagles have collected two wins and three losses, but those losses have all been close (except Little Rock), and those wins have been impressive- one close victory over the UTA Mavericks who have a winning season so far, and one blowout triumph of 30 points over ULM.

GSU also only has a slightly better record of 6-19, one of those wins being over GS by 15 points.

While unsuccessful at the end of play, the Eagles still proved to be a threat.

Individually, Alexis Brown had 13 points and Trell Lurry-English had 11 points against the Panthers, but Kierra Henry had 18 points for the Panthers.

A place the Eagles will have to focus if they really want to beat the Panthers is defense.

GSU outrebounded the Eagles by over 30 rebounds when they last met, half of those being offensive rebounds. Panther Francesca Minali had 18 rebounds alone against the Eagles, almost equaling GS’s total rebound count of 24.

Another huge factor that seems to motivate the Eagles: the fan section. It’s no secret that there is less of a crowd for the women’s games as there is for the men’s games, but it’s time to show up for the women and show some support.

There’s a noticeable difference when there are people in there cheering them on, showing that they care, and giving the Eagles incentive to win for their school.

GS Athletics has issued a whiteout for the game against GSU, which will be taking place Saturday February 17 at 2:00 PM in Hanner Fieldhouse.