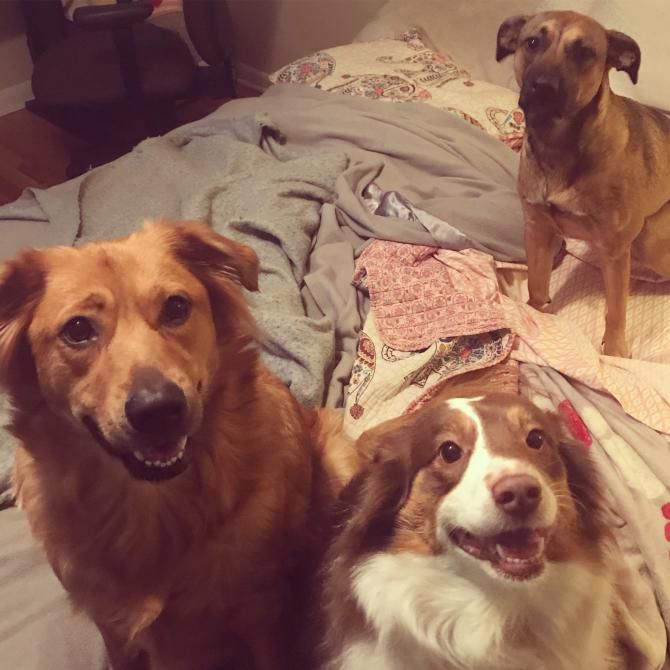 Owning and taking care of pets can be difficult. Despite this, 68 percent of American households own either a dog, a cat or some other type of animal companion, according to the American Pet Products Association, so it’s unsurprising that college students own them as well.

Balancing school and animals, however, can be tricky. Two ‘pet parents’ at Georgia Southern University shared their stories.

Victoria Standrich, junior multimedia film and production major, is a full-time GS student who owns three dogs. She knew from the beginning that her first dog, Lady, would accompany her to GS following her freshman year. The other two were just a matter of happenstance.

“Getting Kahlua and Ali were just decisions of timing and knowing a dog needed a good home,” Standrich said. “It was never really about deciding to become a pet owner…I always had at least three dogs growing up.”

Abby Lee McKenna, senior biology major, said she became a pet foster because she wanted a dog, but knew she wasn’t financially capable of owning one herself. Then, her cat came into her life.

“I found her and her sister as four-day-old babies and bottle-fed them…I then switched over to fostering kittens, because my cat gets along with them best,” McKenna said.

For some, taking care of pets is all about teamwork. Standrich said she couldn’t get by without assistance.

“Luckily I have two awesome roommates that are able to help…when I’m not home. They let all three outside or feed them if I know I’m going to be on campus all day,” Standrich said.

For others, it’s not as simple. McKenna must be willing to make some sacrifices.

“As a foster, I don’t usually pick times for vet appointments…so I’ve had to miss class,” McKenna said.

McKenna also needed to pick up a second shift to pay for vet bills, leaving her less time to study.

The sacrifices don’t come without their own reward. McKenna said, “At the end of the day, as long as I have healthy pets, whatever I had to go through to get there is worth it.”

Every day, plenty of students consider adopting or buying a pet of their own. When asked on what advice they would give to prospective pet parents, Standrich said that students should be mindful of the time commitment a dog requires.

“I’ve met people who go out of town two or three weekends a month and constantly board their animals or have someone pet-sit. I think it negatively effects your dog and their behavior,” Standrich said. “I think about this quote I saw on social media a lot: ‘He might only be there for part of your life, but for him, you are his whole life.’”

McKenna advises other students to be sure to do their research and think about the costs. Grooming, health requirements, food, flea preventative and annual vet bills are all things a prospective owner should consider before getting a pet.