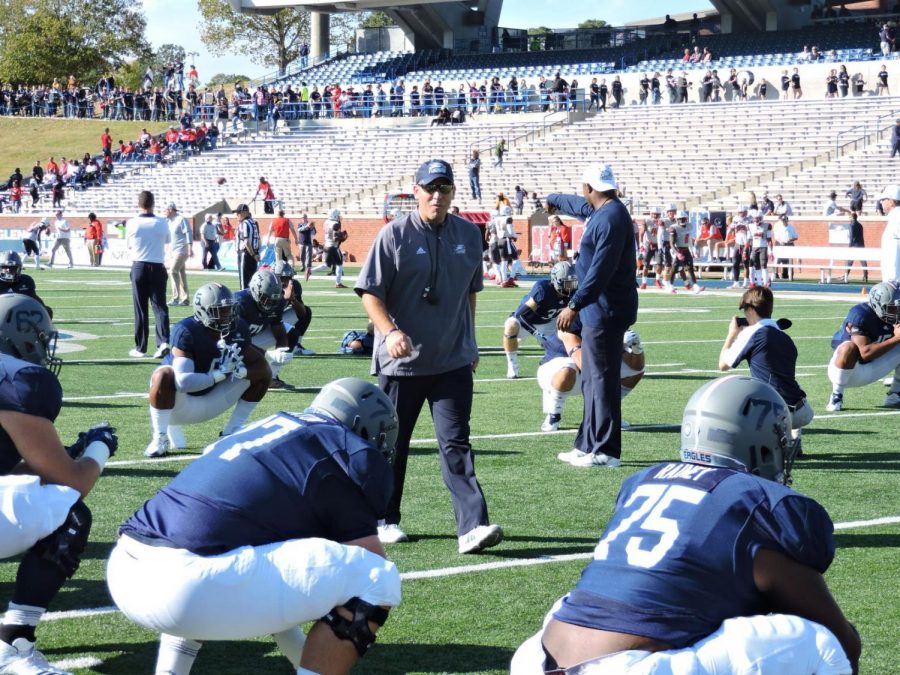 Head coach Chad Lunsford pacing the field before the first win of the season over South Alabama.

It’s been two weeks since the college football season came to a close with Tua Tagovailoa launching a 41-yard bomb into the hearts of Georgia fans.

However, first year head coach Chad Lunsford has been on the recruiting trail since Dec. 3, the day the Georgia Southern 2017 football season came to a close.

Twitter has been loaded with tweets from the head ball coach and assistant coaches tweeting out gifs and memes in celebration of new commits and recruits.

While this time is exciting for Eagle Nation and from the outside can seem very exciting, just how good is the recruiting class thus far?

The Eagles already had eight commits sign their letter of intent in December. This means that these athletes will be able to participate in spring workouts and even go ahead and enroll in Georgia Southern.

The most sought after name in this eight-man cluster is three-star inside linebacker Jontavious Ferguson.

This 6’1” defensive threat from Manchester, GA had offers from the majority of the Sun Belt, Jacksonville State and UCF where he originally committed to last May.

In his senior campagin, Ferguson accumulated 75 solo tackles and averaged 10 tackles per game.

Lunsford and Chris Foster (recruiting coach) were also able to get two-star dual threat quarterback Justin Tomlin to pen his name as an Eagle.

Tomlin’s only other offer came from Valdosta State, which is surprising upon looking at his highlight reel.

He has the arm and, perhaps more importantly for Bob DeBesse’s option offense, he has the running ability and elusiveness.

Many of GS’ top commits are waiting for National Signing Day to officially become Eagles and it seems like every day another another prospect is coming through Statesboro.

Be sure to tune back in to the George-Anne on Feb. 7, National Signing Day, for more capsules on the Eagles’ top signees.