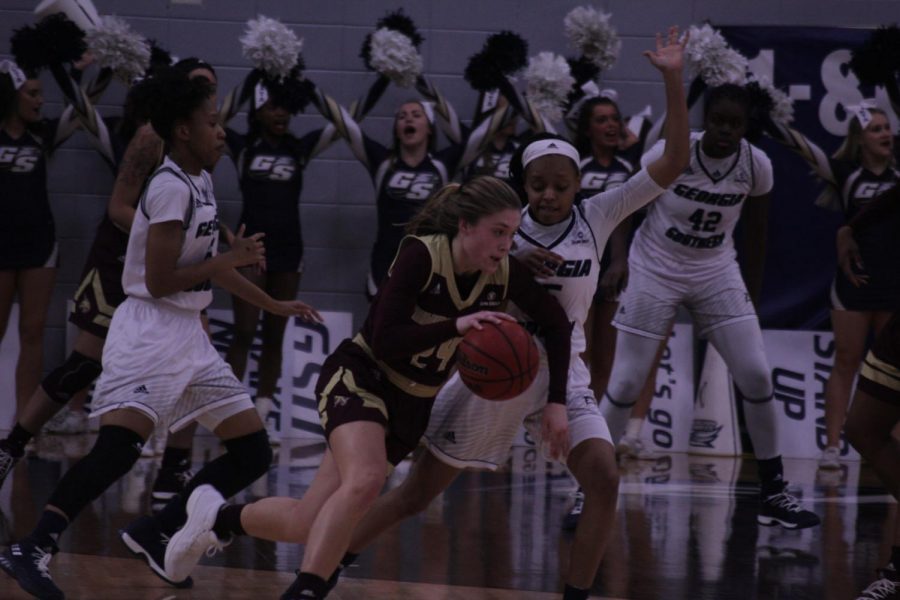 The Georgia Southern women’s basketball team took all they could handle from the visiting Texas State Bobcats, losing 81-56.

The first quarter itself was rather slow for the Eagles, within the first three minutes being down by nine points.

They quickly called a time out and turned the game around with the help of a few turn overs and drives, but still continued to trail the Bobcats.

In the second quarter both teams seemed to have flipped a switch, as it was action packed, fast and a close score the entire quarter until the final buzzer signaling the end of the half, where the Bobcats still led the Eagles 40-34.

GS led in rebounds with 19 at the end of the half, but Texas State only trailed with 18.

At the end of the first half Texas State shot 50 percent from the floor while Georgia Southern was only shooting 38.2 percent.

Whatever spark was lit by the Eagles in the second quarter died when they came out to play the third.

The Eagles went on three separate scoring droughts, all lasting over two minutes. Along with that, GS only added six more rebounds, and was all around slower on the ball.

Texas State took advantage of this spark dying out, as they went on a 22-2 run in the third quarter alone.

The Bobcats improved their field goal percentage of the quarter to 56.5 percent and added 11 rebounds. The third quarter ended with the Bobcats ahead 69-41.

The Eagles seemed to keep that same pattern up in the fourth quarter, slow on the ball and it seemed as if they had just given up. A fourth quarter scoring drought gave Texas State that final edge to beat out the Eagles 81-56.

Bobcat Brooke Holle had a career high of 26 points for Texas State, followed by four more Bobcats shooting in the double digits.

The Eagles on the other hand only shot 31.3 percent from the floor, but did have an impressive 36 total rebounds.

The Eagles will be looking for redemption and their first conference win against UT-Arlington in Hanner Fieldhouse Saturday, January 27 at 2:00.