GS drains Lake Ruby and other ponds for restoration 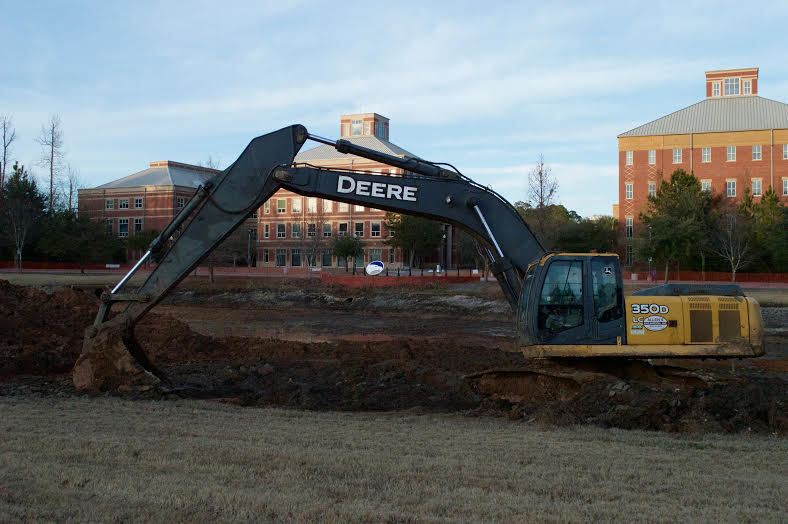 Georgia Southern University drained three of its ponds over winter break for a restoration project that will deepen and remove sediment runoff from the bodies of water.

Large construction machinery can be seen inside of Lake Ruby, Lake Wells and the pond in front of the Nursing/Chemistry and College of Education buildings, moving massive amounts of soil that once sat at the bottom.

What happened to the ponds?

Twining said the ponds are being drained to clean sediment runoff that has deposited over the years and has caused shallower pond depths.

“Having deeper ponds will potentially cause less oxygen and temperature stress to fishes during the hot summer months as fish can move to deeper and cooler water,” he said. “If the pond renovation results in fewer algal blooms, then that can also increase oxygen levels during the warmer months.”

Although increasing the depth of the ponds could benefit the pond’s fish species, GS Biology Professor Ray Chandler does not see the project bringing any major benefits to the campus’ wildlife.

“However, the vegetation in shallow ponds is a habitat for many species, and shallow ponds are more accessible to birds like herons and egrets,” Chandler said. “From a wildlife perspective, there are no major benefits to deepening the ponds.”

Where did the wildlife go?

The Department of Natural Resources’ wildlife division was contacted but did not want any of the aquatic wildlife due to the possible introduction of diseased species, Twining said.

GS’s Facilities Planning, Design and Construction Team also met with the GS Biology Department to determine if there were any species that they would like for collection or protection.

“We did not observe any rare species in the ponds,” Vives said. “Faculty and students from the Department of Biology captured several species of fishes and turtles and relocated those within the same drainage wetland between Forest Drive and the by-pass.”

“Much of the indigent wildlife, turtles, snakes, etc., would have relocated to the adjacent wetland during the ongoing construction process, which is a natural reaction when they have to any habitat disturbance,” Twining said.

However, Chandler said that many turtles were left vulnerable due to colder weather.

“Because of the cool weather, many individuals had already buried themselves in the mud at the bottom of the ponds,” Chandler said. “With their movements limited by cool temperatures some turtles were killed by predators as they left the ponds; other were simply dug up during construction.”

Chandler said the biologists were able to move a few turtles down stream.

“The turtle species involved are common and not a conservation concern,” he said. “However, they are long-lived, 30 to 40 years, and worth saving in that regard.”

Vives said that the GS biology department has not studied the impact of the construction.

Work on the ponds is expected to be completed late January through early February. The ponds located at the RAC remain full.