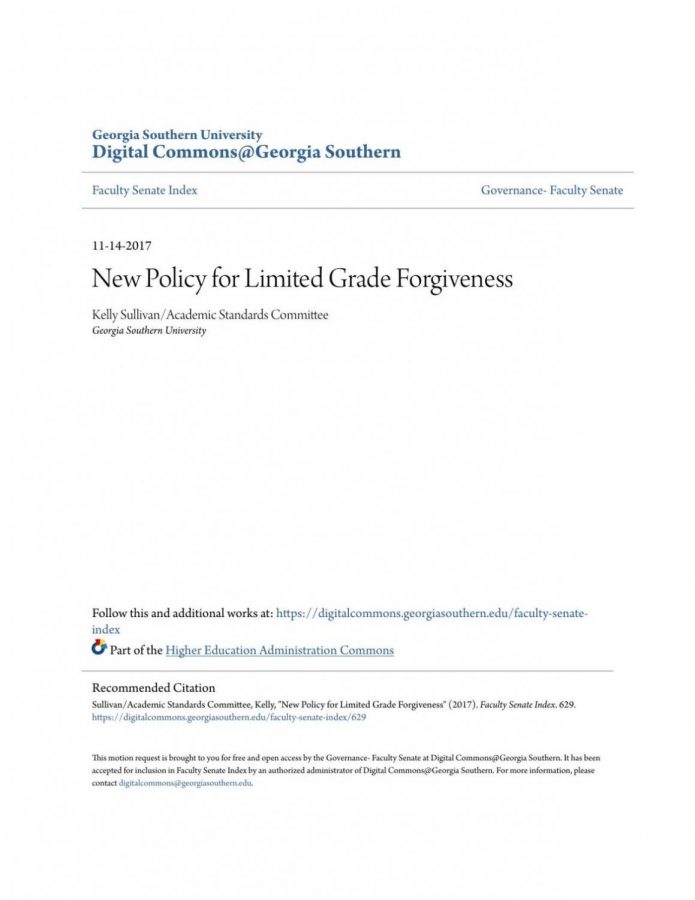 According university documents, the policy was approved by Georgia Southern University’s Faculty Senate and President Jaimie Hebert in Sept. 2017.This will be GS’ first type of grade forgiveness policy since the 2001-2002 academic year.

Committee Chairman Robert Costomiris said the policy is modeled after the current Armstrong University policy on repeating courses, and was suggested due to the consolidation.

Students will be allowed grade forgiveness in five different courses under the following stipulations:

Only in areas A through E of the University’s COREOnly GS courses with a final grade of D, F and WFStudents must have either retaken the same undergraduate course or a course that satisfies the came CORE requirementMust earn a higher grade in the course retaken

According to university documents, requests cannot be revoked or reversed. The policy does not apply if the original grade was assigned as a result of a violation of the Student Code of Conduct.

Grades for both attempts for a taken course will appear on the student’s official transcript regardless if the grade has been excluded from the student’s GPA and a copy of the request and approval will become part of the student’s permanent record file.

Students who have retaken courses prior to Fall 2018 will not be allowed to delete earlier attempts from their GPA calculation.

“There was a similar policy to this at the college I used to go to, Middle Georgia State,” Simpson said. “It was beneficial for those who had problems the first time around and were serious about passing the class.”

However, Shannon Anderson, sophomore biology major, does not believe that the policy represents what college is truly about.

“In the adult world, you don’t always get a second chance,” Anderson said. ”It’s seems like an easy way out for students who don’t want to take their grades seriously.”

For more information about the new grade forgiveness policy please view the documents below.