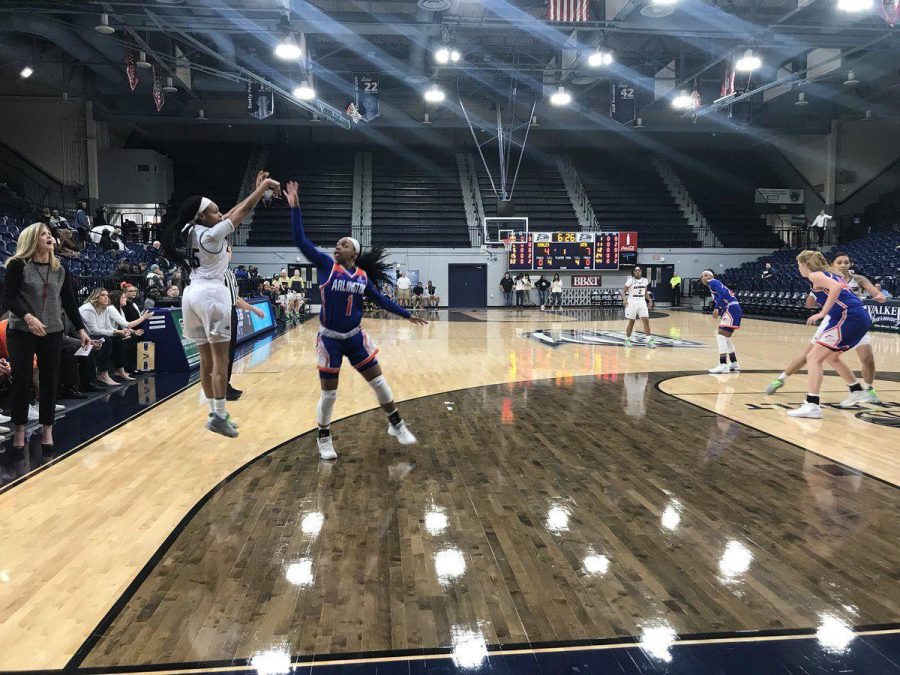 The streak is seized

Saturday afternoon’s women’s Sun Belt conference game between Georgia Southern and UT-Arlington was one to remember.

The game started with UTA winning the jump ball, then shortly after that, scoring the first basket of the game. This would spark offensive dominance for the Mavericks, and by the time five minutes were played in the game, they forced a GS timeout, already had a 14-4 lead, and were on 9-0 scoring run.

Shortly after the timeout, sophomore guard Alexis Brown weaved in and out of the Maverick defense, making a smooth pass to freshman center Sarah Moore down low for an easy two points.

As the first quarter ended, it seemed as though UTA was starting to run away with it early, already up 25-13. This quarter was defensively dominant by the UTA defense, effectively running a full court press that had the GS offense befuddled.

After sophomore guard Nakol Franks hit a three pointer a few seconds later, the Eagle offense started to click. After four more minutes of play and tough play from junior forward Rhein Beamon and Franks, the game was brought back to within 6 points.

When the buzzer sounded for halftime, UTA led 40-32. The key to the UTA success was their full court press, but after GS went on a 7-0 run toward the end of the half, the Eagles pretty much figured out what to expect from the press.

Georgia Southern struck first to begin the half, and from then on out, struck often. After an Alexis Brown three just three minutes into the quarter, the Eagles had already fought back to a one-point deficit to be down 42-41.

30 seconds later, senior guard Trellanie English-Lurry nailed a dagger to give GS their first lead of the game, leading 44-43.

For the rest of the quarter, both offenses battled back and forth, and at the end of the third quarter, UTA led 54-51.

The fourth quarter did not start off conventionally at all. In the first three minutes of play, the refs called a total of 8 fouls, 5 on GS, 3 on UTA. This led to an eruption of angry fans, calling out the refs for being trigger happy with their whistles.

The Eagles didn’t let this barrage of fouls affect them, and senior guard, Alexis Faulks, hit a clutch jumper to bring the game to within 3.

Both offenses continued to fight, and at 3 minutes left, Alexis Brown hit a deep 3 to tie the game at 60.

The two teams did not score much over the next two minutes until sophomore forward, Hailey Dias Allen hit a three to take the lead 65-62 with a minute left in regulation.

UTA responded with a two point field goal, and a few seconds later, Alexis Foulks drove to the basket for an easy layup to take another three point lead.

The Mavericks’ next possession was successful, but it was too late. GS gained possession after the UTA basket, and would hit four more free throws before the game was over, giving the Eagles a 73-68 win.

This win marked Georgia Southern’s first conference win of the season, beating a team that was on a 3-game win streak and seemed to be on a roll.

A lot of players contributed at high levels for the Eagles in this game.

Five players put up double digit performances. Nakol Franks led the team in scoring with 16 points, followed by Hailey Dias Allen with 13, Trellanie English-Lurry with 11, and Alexis Foulks and Rhein Beamon each finishing with 10.

Alexis Foulks and Alexis Brown each grabbed 5 boards. Sophomore guard Amira Atwater, who could not be contained by the UTA defense, had a season high in assists with 13.

The Eagles’ next matchup will be in Little Rock, Arkansas, against Sun Belt opponent, Little Rock on Thursday. The game will begin at 6 PM and can be listened to on Georgia Southern Sports Network.

Brown and company bounce back against the Mavericks

The Georgia Southern men’s basketball team got back on track with a defiant, 74-59 win over visiting UT-Arlington Saturday night.

The Eagles had a slow, low-scoring first half against UTA. What seemed to be a strong start quickly went downhill when UTA went on a 7-0 run which put the Eagles five points behind, and from there the gap only increased.

With both teams entering bonus from fouls fairly early in the game, most points in the first half accumulated from free throws for the Eagles.

With those free throws, in addition to key plays from the Eagles capitalizing on UTA’s 13 turnovers, they closed the fairly large gap, but it wasn’t enough to grab the lead.

The Eagles only trailed the Mavericks by two points as they entered the second half but had a low percentage of 35 percent shooting from the floor, while UTA held an impressive 54 percent.

The tight, low score of the first half showed to be a battle of the defenses, as shown by the accumulated 13 rebounds from the Eagles and 20 from the Mavericks.

Despite the deficit of the first half, GS came out strong, being the first to put points on the board to tie the game. From there the Eagles, along with the help of Hanner Fieldhouse, turned a tied score into a lead.

The home team was looking to win, and that showed when they came to play in the second half- they raised their field goal percentage to 44 percent, while the mavericks when down to shooting 43 percent from the floor.

The first half was a battle of the defenses, the second half proved to be a takeover from the Georgia Southern offense. Not even the 22 rebounds from the Mavericks in the second half would be able to stop the Eagles.

It was redshirt junior forward Shawn O’Connell who delivered a crowd raising final dunk with less than a minute of play to cap off his four rebound and six point night.

The Eagles will hit the road to face the Little Rock Trojans in Little Rock, Arkansas, Thursday, Feb. 1.