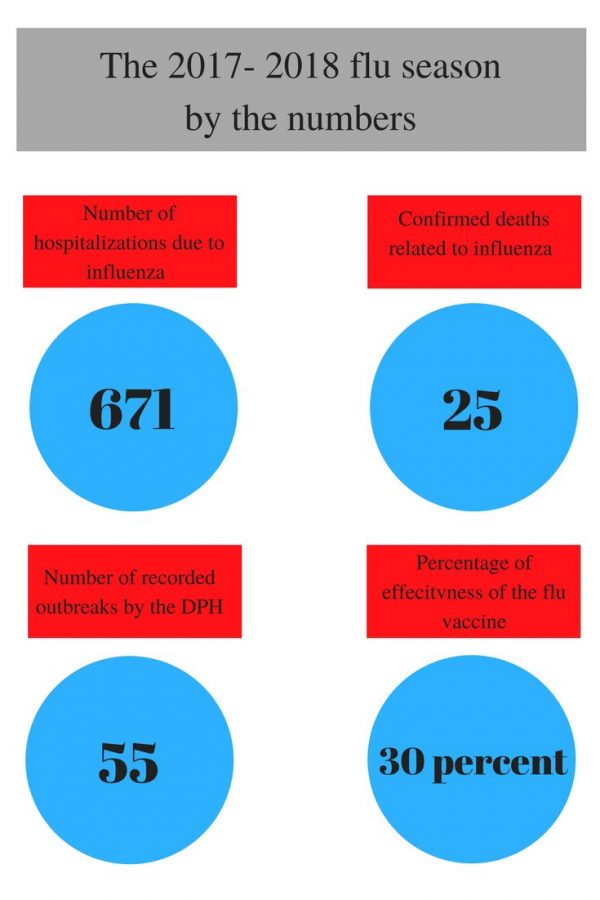 The state of Georgia and the entire nation continues to battle the influenza virus.

The illness continues to be widespread in the state of Georgia while claiming the lives of 25 Georgians this flu season, according to the Center for Disease Control.

“Our peak week for flu last year was the last week in January, when we diagnosed 54 cases in the Statesboro campus clinic,” Deloach said in an email. “So we are up some in total cases in our clinic, and we are seeing that increase two weeks sooner than last year.”

Deloach said Statesboro typically peaks in late January to mid-February and encourages everyone to get their flu shot.

However, according to a Twitter poll by The George-Anne, 65 percent of respondents will not get a flu shot while 28 percent have received a flu shot and only 7 percent are planning on getting a flu shot.

The following statements by the CDC and Deloach are answers to possible reasons why one would consider not getting a flu shot.

Every time I get a flu shot I get the flu.

According to the CDC, getting the flu shot cannot cause flu illness.

Flu vaccines given with a needle are currently made in two ways:

with no flu vaccine viruses at all (which is the case for the recombinant influenza vaccine).

According to the CDC, there are four main reasons why someone that receives a seasonal flu vaccine may still get sick with flu symptoms:

The flu vaccine only protects against influenza, not other illnesses. Other respiratory viruses besides flu such as rhinoviruses, which are associated with the common cold, cause symptoms similar to flu, and also spread and cause illness during the flu season.

Exposure to influenza viruses shortly before getting vaccinated or during the two-week period after vaccination that it takes the body to develop immune protection.

Those vaccinated may have been exposed to a flu virus that is different from the virus the vaccine is designed to protect against.

Flu vaccines can vary in how well they work. Some people may still get sick. Deloach said that data from this year suggests that the flu vaccine is only 30 percent effective.

Why get the vaccine if it’s only 30 percent effective?

Deloach said that although data from this year suggests that the vaccine is only 30 percent effective, the CDC is still advising health care providers to continue to recommend the vaccine to those who have yet been vaccinated.

“I tell patients that even if the vaccine is only 30 percent effective, that is still better than zero percent,” Deloach said.

It’s too late to get a flu shot.

According to the CDC, it’s not too late to get the flu shot as long as flu viruses are still circulating.

“It can still be protective to get vaccinated in December or later,” the CDC’s website says. “Flu is unpredictable and seasons can vary. Seasonal flu disease usually peaks between December and March most years, but disease can occur as late as May.”

I got one last year. I don’t need one this year.

The CDC recommends everyone six months and older to get a yearly flu vaccine.

Flu viruses are constantly changing. Each year flu vaccines are updated to protect against the most common circulating viruses.

The protection the vaccine provides against the flu can decrease over time, so it is important to get a flu vaccine every year, according to the CDC. Flu vaccines from previous years may not protect you from getting the flu this year.

I don’t want to get the flu shot.

The CDC and Dr. Deloach reminds us that getting vaccinated for the flu isn’t just about us but about our community as well.

“Flu can be a serious disease, particularly among young children, older adults, and people with certain chronic health conditions, such as asthma, heart disease or diabetes,” the CDC’s website reads.

According to the CDC, all 25 Georgians killed by influenza this flu season were older than 51 years.

“Vaccination potentially protects not only the person vaccinated, but also others in their community through the concept of Herd Immunity,” Deloach said in an email.

According to the CDC, herd immunity is defined as a population that is immune to an infectious disease, through vaccination and/or prior illness, to make its spread from person to person unlikely.

“I have had the flu twice since I graduated from high school: once in college and once in medical school,” Deloach said. “Both times it was miserable. I would take a flu shot every day of my life if it would even slightly reduce my risk of getting that again. Thankfully, I only have to take the shot once a year.”

Health Services still has vaccines available. Students, faculty and staff can walk-in to the Statesboro campus Health Center Pharmacy and get vaccinated Monday-Friday from 9 a.m. to 11 a.m. and 1 p.m. to 4 p.m.

Tori Collins contributed to this article.