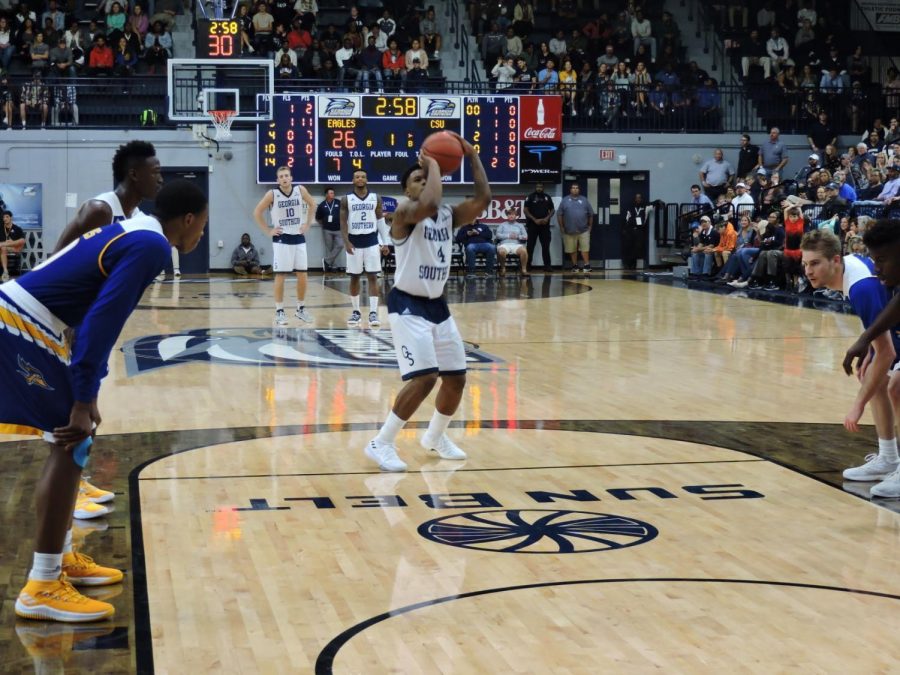 While the nation was engulfed by the annual Army-Navy football game, the Georgia Southern men’s basketball team got into a running game of their own with the Savannah State Tigers. In a close battle, the Eagles would extend their win streak to two with a 102-91 victory at home.

Junior guard Tookie Brown led the team in scoring with 32 points while picking up 6 assists. Junior forward Montae Glenn had a career day with 16 rebounds and scored 11 points for a double-double.

Here at Hanner for a game with Savannah State. About 30 minutes from tip-off. pic.twitter.com/YFmLm6RU8P

Coming in to the game Saturday both teams were averaging more than 25 3-point attempts a game. Both teams delivered on their three pointer by making 5 combined 3s to start the game off. Georgia Southern went out to a 7 point lead, but their lead was slowly diminished with unforced turnovers. A rare layup attempt from the Tigers gave them their first lead of the game at 23-22. Both teams continued to go back and forth, but the Eagles led by senior guard Jake Allsmiller and Tookie Brown would close out the first half fairly commandingly on a 10-4 run.

Halftime from Hanner! Cold outside but the teams combined for 15 triples in the first 20 minutes pic.twitter.com/1VxNXqpzoM

Down by 7 after halftime, Savannah State shot a layup to build momentum. It was a back and forth game that GS was winning. Neither team had a very efficient second half with many turnovers and fouls. After a lazy start to the second half, GS really played determined and showed off their depth.

Senior BJ Gladden was the reason the game never got close again with several huge rebounds and layups. The game went final with a monster slam dunk from redshirt freshman guard Quan Jackson.

The Eagles begin a 6 game road trip Tuesday night at George Mason in Virginia. The Patriots are 5-5 with several respectable losses including an 11-point loss at Louisville.

After George Mason, the Eagles travel to California for a rematch with CS-Bakersfield. Georgia Southern beat the Roadrunners with ease in Hanner back in early November.

A game at Kennesaw State followed by a matchup with East Tennessee State will conclude the non-conference play for the season. GS ends 2017 with back to back road games at Troy and South Alabama- two Sun Belt teams that the Eagles should fare well against.