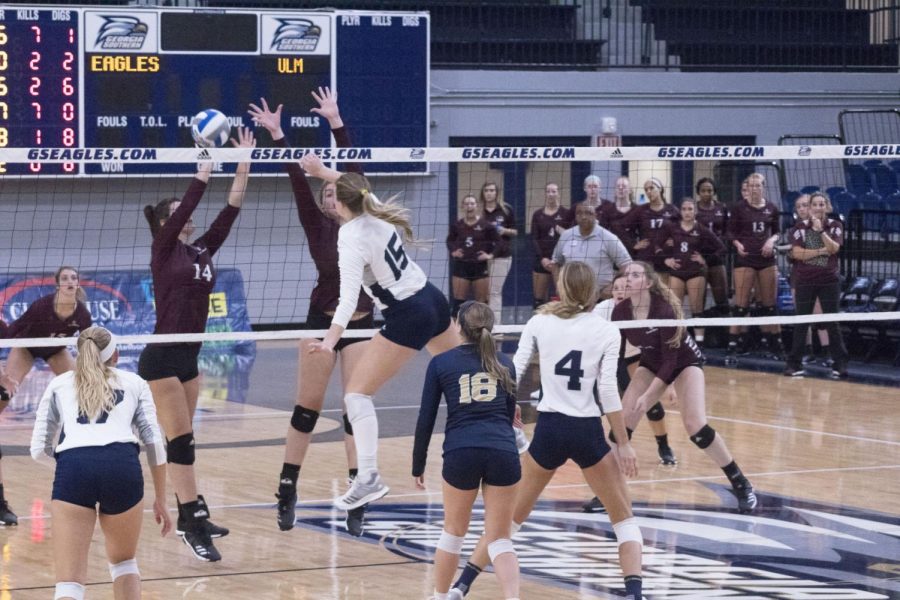 Junior April Luther sends the ball over the net. Luther has 152 digs this season.

The Eagle’s volleyball team will host the 9-17 Appalachian State Mountaineers on Friday at Hanner Fieldhouse.  The game is set to start at 6:30 p.m. and will be aired on ESPN3.

The Eagles have lost seven straight games, with five of those coming on the road.  GS has played well at home this season, posting a 4-5 record, with four of those losses that were a back-and-forth battle.  Junior Lauren Reichard leads the Eagles with 223 kills, while junior Joscelin Morrow leads the team with 284 digs. The last game against the Mountaineers resulted in a loss for the Eagles, one of the ten away losses GS has suffered this season.

App. State has also struggled as of late, losing seven of their last ten, but are coming off a win against Troy.  For App State, sophomore Melissa McMath leads the Mountaineers this season with 329 kills, while junior Olivia Loeffler leads the team with 431 digs.

GS will wrap up their regular season in the next two weeks.  After today’s game, the Eagles will have only three more games to play, including two against their conference rivals, Georgia State.

The Eagles will have to play to the best of their abilities over the next four games in order to make the Sun Belt Tournament, having three conference games left to make it to the tournament.