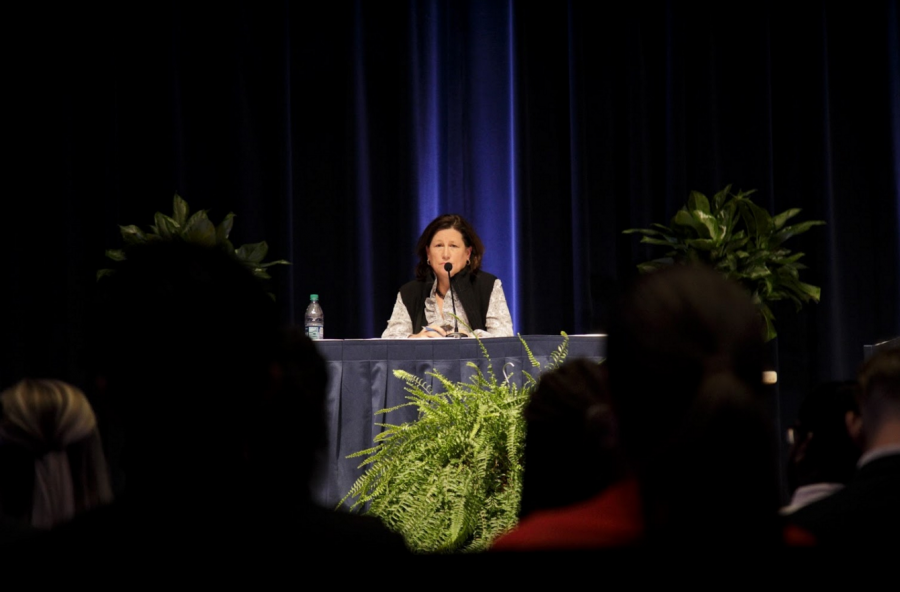 Georgia Southern University held a forum for Statesboro's 2017 mayoral candidates on Wednesday, Nov. 1. Candidates were given the opportunity to meet with audience members after the forum. However, Incumbent Mayor Moore left early. Photo by Dylan Chapman

Incumbent Mayor Moore responded via email that her reasoning for leaving directly after the forum was because the event had been rescheduled from its original date of Oct. 25 and the new date conflicted with a prior commitment scheduled for 8 p.m. the night of the forum.

Valencia Warren, SGA executive vice-president, said the SGA, who hosted the event, did not receive a reason for the mayor leaving directly after the forum.

Incumbent Mayor Jan Moore was nowhere to be found after Wednesday’s 2017 Mayoral Forum at the Georgia Southern University campus.

Mayoral Candidates John Grotheer, Jonathan McCollar and Moore met with the GS community in the Russell Union Ballroom to answer submitted questions from the GS community.

After the forum, candidates had separate tables in the back of the ballroom where they were scheduled to meet with audience members who had any additional questions about their campaign platforms.

However, according to a tweet by Rickey Jones, senior fashion merchandising and apparel design major, Moore’s table was empty.

Mayor Jan Moore of @CityStatesboro was nowhere to be found after an interesting Mayoral Forum with @GeorgiaSouthern Students ‼️‼️ pic.twitter.com/7D9L1wYgqp

“I wanted to ask Mayor Moore to explain some ways in which she thought Statesboro was diverse and inclusive, since she decided to focus more on Georgia Southern during her answers,” Jones said via email. “I also planned to ask Mayor Moore about some of the ways she planned to engage the current and future student population with civic leaders and decision makers in Statesboro to make it a more involved community as a whole”

Jones said that no one explained why Moore left early and her absence was recognized by everyone in the room including members of the Student Government Association who hosted the forum.

“She left before she could get interrogated by the student population!” he said in the video he tweeted.

Jones observed that the other two candidates spent ample time with students, and were open and candid when it came to answering additional questions.

“As the current mayor, she left me concerned about her views on our position as citizens of Statesboro, and not just students at Georgia Southern,” Jones said via email.

Moore was reached for comment by phone call and email but was out of the office.