Bringing businesses back to South Main 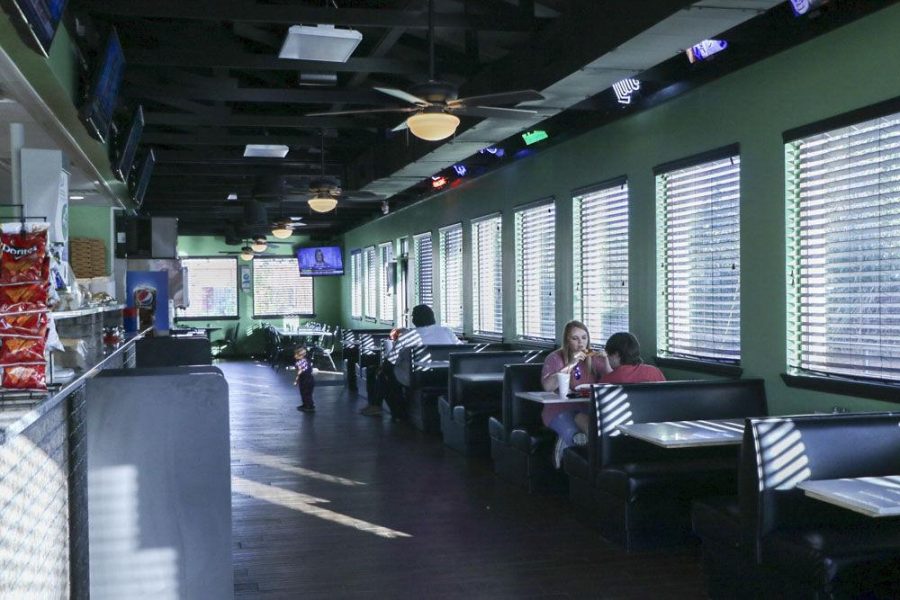 A project that started back in 2011, The Blue Mile, has allowed the Downtown Statesboro area to grow economically through the past couple of years. Many businesses have opened and closed since the idea came about.

The Blue Mile is a project to revitalize Downtown Statesboro, primarily the South Main corridor that connects Georgia Southern University with downtown. The process has been long and it is expected to take a couple of years to be finalized, but a lot of improvement has been seen, thanks in particular to the number of new businesses in the area.

Since The Blue Mile project began, about 10 businesses have opened up on South Main Street, Keely Fennell, co-chairman of The Blue Mile Committee, said. The majority of those places are food establishments, like Three Tree Coffee Roasters, who moved to The Blue Mile in 2015, and Big Boy Cookies, which opened in 2017.

However, some businesses have closed. 441 Public Kitchen closed in 2016, but the owner, Seni Alabi-Isama, opened a new business on South Main St. called Smoque Pit. Fennell doesn’t feel this is a trend that has been common in The Blue Mile.

“To my knowledge, there’s been very few businesses that have closed,” Fennell said. “I think  mostly it has been very positive and a lot of new growth and new revitalization.”

Hannah Womack, co-owner of Big Boy Cookies, didn’t know anything about The Blue Mile until the owner of the building they are renting told them about it. Originally, the business was a food truck, however, Womack and her husband, Jonny Womack, decided to settle down in Statesboro and open up a cookie shop.

“I think in general I feel like The Blue Mile helps us because I feel like it increases the traffic in this area of town. I think that it enhances the whole community, the idea of community and that whole connection there,” Hannah Womack said. “For us, wanting to plug into the local aspect of business because when we were in the trailer, we went all over the state. We were hardly even around in Statesboro, and this is where we live.”

Remaining open on The Blue Mile

For Philip Klayman, owner of Three Tree Coffee Roasters, one of the biggest concerns for him and for any local business owner is the possibility of their business closing. It is a reality that many businesses in Statesboro, in and out of The Blue Mile, have experienced in recent years.

“It can make me nervous. I see it pretty regularly and I can understand why. From the outside, everyone keeps telling us, ‘Man, you are always busy,’ ‘Your place is always packed,’ ‘It looks like you are doing great.’ The honest truth is that it’s tough. It’s tough to make this business work,” Klayman said.

In an attempt to keep businesses open on The Blue Mile, The Blue Mile committee and the Downtown Statesboro Development Authority (DSDA) have been working hard to ensure that businesses remain open with different plans and incentives. Darron Burnette, co-chairman of The Blue Mile Committee, feels an important aspect was to engage stakeholders and make sure they were part of the conversation. In addition, Burnette feels that the third place finish on America’s Best Communities Competition created a lot of excitement in the area.

One way The Blue Mile Committee is trying to engage and keep businesses on The Blue Mile, is through a partnership with Georgia Southern called, “Eagles GATA Eat”. The goal of the program is for businesses to give discounts to consumers before any sporting event at GS, Fennell said. Fennell feels this program has a lot of benefits for the businesses.

“This is engaging Georgia Southern folks, community folks, students to come into these businesses to kind of keep them on the forefront of people’s minds when they’re considering going out to eat, shopping or dining,” Fennell said.

Womack feels that the city has helped a lot with marketing different businesses. For Big Boy Cookies, it has provided them with “marketing that we otherwise wouldn’t have”, Womack said. Elena McClendon, office manager of the DSDA, feels it is important for businesses to be able to market themselves in order to be successful, but the DSDA will try to help them a lot.

“As far as ensuring business success, if they have a good business and they know how to market well and they are meeting a need, then they’re going to succeed, but their success is not dependent on us,” McClendon said. “[Creating a website and marketing the businesses] doesn’t ensure their success, but we’re helping to promote them so that when people are driving and they’re trying to find where to eat, where to shop, where to play, what’s going on downtown or where to live downtown, that’s all on our website.”

One of the problems for The Blue Mile has been that some businesses have chosen to open on other parts of town, like the Market District on Brampton Ave. This doesn’t concern Fennell, rather, she feels that businesses have started to move more towards downtown because of The Blue Mile.

In terms of the type of businesses that come, either local or national chains, for Fennell and Burnette, it doesn’t matter, however, Brunette feels that more people will go to “a destination spot for a chain, more than they will [for a local business]”.

“We are equal opportunity [in terms of businesses on The Blue Mile],” Fennell said. “The more people, the better. We are not opposed to anybody. We’re excited that people find an interest in The Blue Mile, but, local not local.”

Burnette and McClendon feel that the downtown area of a town is “the heart of the community,” and they hope that with The Blue Mile, Downtown Statesboro can grow to be that heart that the community can be proud of.

“Downtown is the heart of any community, so we need to make sure that we have a strong heart,” Burnette said. When people come, and they want to relocate a business here or move into the community because they’re living close to area, we want them to see it and say, ‘This place is vibrant. There’s a lot of activity you don’t have to go to Savannah or Augusta for entertainment. We have all the things the quality of life that people are looking for.’”