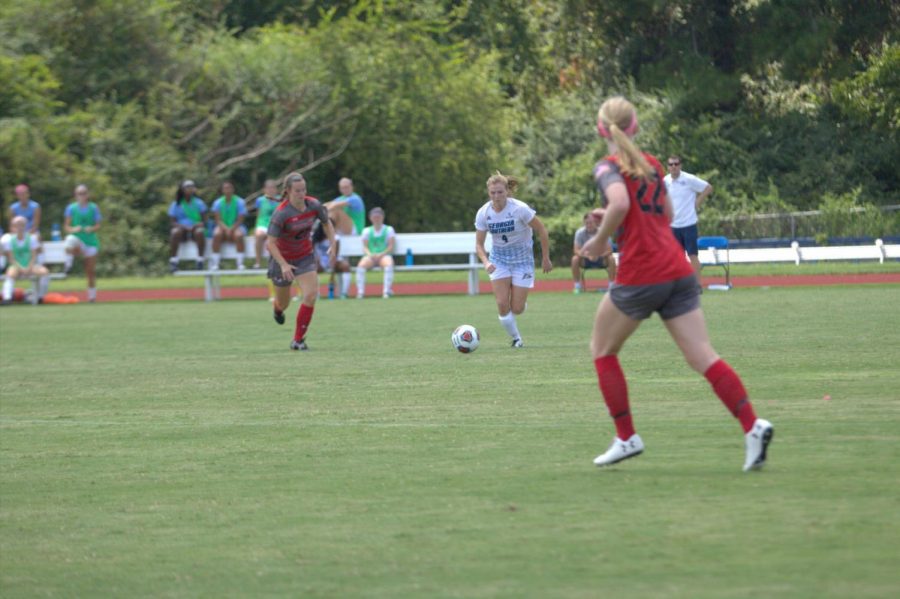 GS senior Sarah Price controls the ball in a game earlier this season. Price finished the year with four foals after scoring twice this weekend in a win over Troy.

Teams from around the Georgia Southern athletic department were active over the weekend including the Sun Belt soccer tournaments and men’s and women’s basketball playing their road openers.

The Eagles opened Mark Byington’s fifth season as head coach by upsetting Wake Forest, 85-83, in Winston-Salem, N.C. on Friday. Junior Ike Smith eclipsed 1,000 career points in the first half and went on the drain the game-winning free throws.

GS will play its home opener Monday at 7:30 against 2017 NIT semifinalist Cal State-Bakersfield.

The Eagles take on Coastal Georgia at 5 p.m. in Hanner Fieldhouse on Monday.

The Sun Belt Freshman of the Year, GS midfielder Aldair Cortes, hit the game-winning penalty after App State narrowly missed a chance off the crossbar.

On Saturday, GS would fall to Georgia State 3-1, ending its season with a 9-8-1 overall record.

Coach Brian Dunleavy’s squad upset No. 3 seed Troy, 2-1, in the first round of the Sun Belt tournament. Senior Sarah Price scored two second-half goals and the Eagles beat a Troy team that had blown them out, 5,-0, previously.

The Eagles went on to lose to Coastal Carolina in the second round, ending their season at 8-9-2.

The Eagles lost to Georgia State, 2-3, in Atlanta on Saturday. The Eagles nearly came back from down two sets, with junior Lauren Reichard leading the way with 13 kills.

Freshman Skylar Ball tallied nine blocks in the match, which was the last of the season for GS.

The women’s rifle team placed third in its final event of the fall, hosted by The Citadel.

Sophomore Courtney Weekley broke the school record in the small bore competition, scoring 575, a part of her career-best 1,159 aggregate score.

The Eagles placed 25th at the NCAA Regional in Tuscaloosa, Ala. Senior Bailey Willett set a new school record in the 6K race with a time of 22:10.

It was the Eagles’ final event of the fall semester.