Sniffing out crime: Getting to know GSPD’s police dog 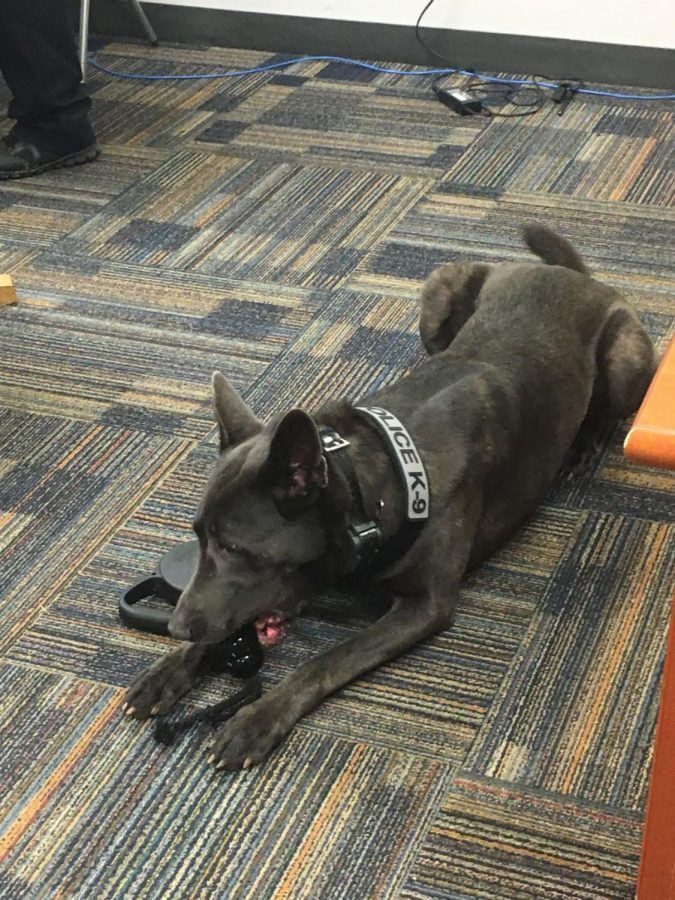 Deimos is used at sporting events here at Georgia Southern.

Recently, an honorary team member of the Georgia Southern Police Department was re-certified for his first time. However, he probably isn’t who (or what) you might be thinking of.

Meet Deimos, a three-year-old Dutch Shepherd. He specializes in detecting explosives, and has been working with GSPD for nearly two years now.

According to Erk McCurdy, a canine handler for GSPD, Deimos was donated from Bulloch County Sheriff’s Department and worked in Tampa, Fla. before joining the Georgia Southern police force.

“We were lucky because these dogs can cost up to $12,000 or $13,000,” McCurdy said. “A deputy that worked in Tampa was retiring and decided he wanted to donate Deimos, and he contacted Bulloch County.”

McCurdy said that Bulloch County did not have any openings for police dogs at the time, which is how Deimos ended up at GS.

He later received his police dog certification at Chatham County Sheriff’s Department after making excellent marks on his training tests.

Since Deimos is trained to sniff out materials used in explosives, his training process is heavily based on locating practice materials.

A bag of black powder that is used to simulate explosives is hidden somewhere in a room. Deimos will have to locate the bag by sniffing it out in order to pass the test.

He uses a special dog toy to help him with training. Once he sniffs out and finds the powder, McCurdy throws him his toy.

“There are certain odors that Deimos hasn’t been fully trained on yet and some of the odors he has been exposed to can overwhelm dogs, but he’s been doing really well so far,” McCurdy said.

According to McCurdy, Deimos has not yet experienced a lot of real action here at GS, but mostly false alarms.

“We’ve had several suspicious packages,” McCurdy said. “One of them turned out to be a bagged lunch that somebody left under a tree by the baseball field, and a lot of others have just turned out to be book bags.”

Most of Deimos’ work consists of patrolling sporting events or events where the governor will be present, McCurdy says.

“We’ll go to the Atlanta Falcons games and help them do the sweeps up there before the games,” he said. “We also assist Chatham County at different locations and in return, they’ll come up and help us sweep up Paulson Stadium on game day.”

McCurdy says he is proud of Deimos since he has made significant progress in his training during his time at GS.