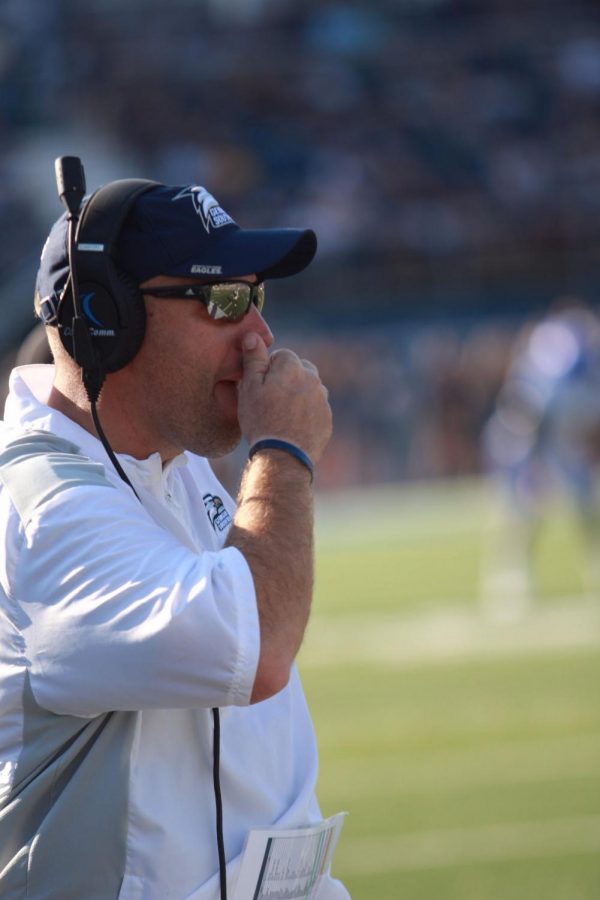 Georgia Southern came out determined Thursday night in Boone, NC. In a rivalry that has been dominated by the Mountaineers for the past two years, the Eagles held their own in the first half. Unfortunately the game of football is 60 minutes and the Eagles fell to their rival in the mountains 27-6 and 0-9 on the season.

Despite scoring first for the first time since last season, the Georgia Southern offense slowed down and headed to the locker room with a mere 107 yards. App State started with a 3 and out, but was able to turn it around behind quarterback Taylor Lamb’s 80 rushing yards including a 44 yard carry to set up a 53 yard Chandler Staton field goal to end the half.

GS started off with the ball and looked like they had a drive but were quickly shut down with a Werts sack on 3rd down. The Mountaineers known for their strong passing game only attempted one pass on their first drive of the night. GS defense locked down the run game with a unique scheme and forced the home team to punt.

On the ensuing drive, Werts and the new-era option offense went to work. Werts continued his strong play from last week’s game along with Wesley Fields and LA Ramsby in the backfield. A 28-yard-run from Werts set up a 1st and goal on the 4, but was brought back with a late block in the back penalty. Tyler Bass picked up the first points of the night with a 29-yard field goal.

App State responded with an 8 play drive ending with a punt. Georgia Southern couldn’t do any better and gave the back to the Mountaineers who made quick work of the Eagles defense. The home team took the first lead of the night after an easy 5-play, 56-yard touchdown drive to tight end Collin Reed.

Both teams traded 3-and-outs and it seemed like the half would end with a 7-3 score, but Mountaineer quarterback Taylor Lamb had other plans. On a 3rd and nine from his own 21-yard-line, the quarterback took the ball straight up the middle and would go 44-yards before being forced to the ground, saving another touchdown. Staton went on to hit the 53-yarder, his first of two.

Lamb and the Mountaineers continued to work the ball on the ground and marched right down the field to set up Staton’s second of the night to make it a 10 point game. Georgia Southern hadn’t given up yet as Werts continued to run the triple option steadily to set up a Bass 44-yard field goal. The App State passing offense continued to slice and dice the Eagles defense with Lamb hitting Ike Lewis for a 20-yard touchdown.

On a long, tedious drive from App State, they converted a 4th down to set up their third touchdown of the night. The next drive, backup quarterback Kado Brown had about two minutes to go, but fell just 11-yards shy of the end zone, nailing the coffin on a cold night in November.

Truthfully, the only reason every game hasn’t been a complete blowout is the special teams with Tyler Bass and Matt Flynn. This is now three years in a row the Eagles have lost to rivals Georgia State and App State. There are three games left to find a win, but with this team, there might not be a win to take.

The Eagles return to Paulson next Saturday to host the South Alabama Jaguars at 3 p.m..