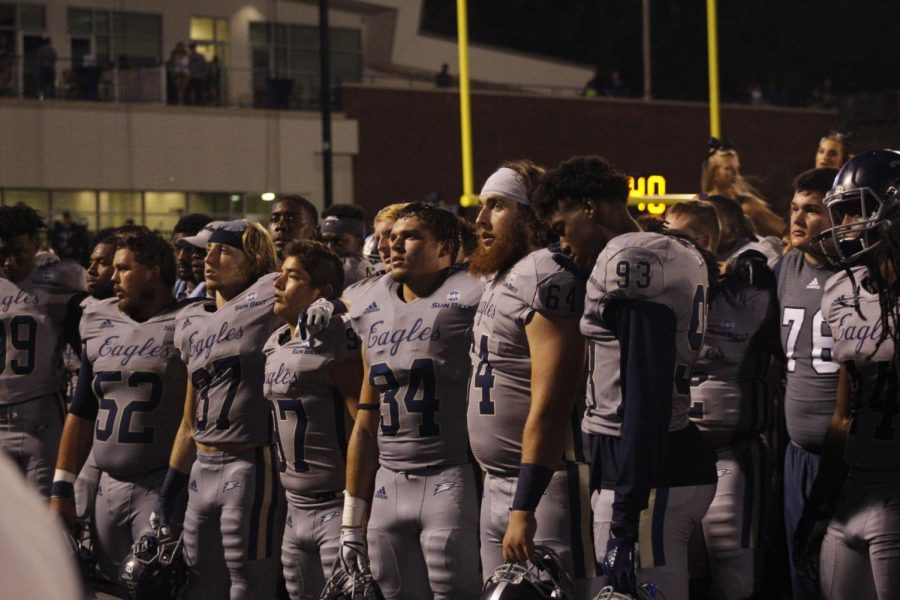 The Eagles line up after the New Mexico State game earlier this season. They take on Georgia State at 3 p.m. on Saturday.

Now that it’s official that the Eagles will be watching bowl season from home, this game Saturday is solely for pride and hate against that team from Atlanta.

The Panthers have had their way with Georgia Southern winning back-to-back years with an average margin of 16 points. Georgia Southern only has one win in this young series and it happened back in 2014 with GS winning 69-31 in Atlanta.

As the Eagles look to scrape together their first win of the season, the Sun Belt’s four-place team, the Panthers, will try to continue their climb up the standings.

Options for the option

Last weekend’s game against Troy featured a rotation at quarterback with Shai Werts and Kado Brown. The two players performed about the same though Brown ultimately saw more snaps.

Brown finished 4-for-7 for 42 yards and rushed for another 21 yards on 15 rushes. Werts did about the same through the air going 2-for-5 for 40 yards, but did significantly better on the ground with 72 yards on 11 carries.

Neither quarterback has had a truly standout game so far, but the two quarterback system might be the best move against a stingy Georgia State rush defense who only allows 115 yards a game. This strategy worked the past two seasons and if isn’t broke, don’t fix it.

The Eagles have only had a player eclipse 100 yards rushing 4 games this season, surprisingly. In recent years, Matt Brieda and Jerick McKinnon have eclipsed 100 yard games alone weekly.

Through 7 games, there has yet to be an established running back in an option offense. That can’t happen. Wesley Fields is averaging just 62 yards a game and only has 3 touchdowns to show for it. The other back who gets a lot of the load is senior L.A. Ramsby, who is only averaging 50 yards a game and has totaled two touchdowns in his last year.

As a team that was once the best rushing offense in the nation, Georgia Southern is averaging 203 yards a game. That is 32nd nationally. Against Georgia State, expect for the option to be in full effect to keep the Panthers guessing.

It’s no secret that the pride for this team and the school really has been sacrificed to a winless season. The Eagles have lost to their two rivals-Georgia State and Appalachian State- the past two seasons. It’s embarrassing for sure, but a new Chad Lunsford era brings a new sense of hope.

Saturday will be parent’s weekend and the Eagles would love nothing more to stop this tragedy of a season by tying the series record against State this weekend. It would also be a huge emotional win for this team who has payed against many of these guys through high school.

Redshirt senior quarterback Conner Manning has tossed for 244 yards per game, and he leads the Sun Belt with a 64.8 percent completion rate.

The Panthers have a multitude of running backs who are capable of reeling off big gains, but no lead back has emerged thus far.

A pass-heavy offense like Georgia State will give the Eagles a chance to test their secondary, which has been burned repeatedly this season.

The game will start at 3 p.m. in Paulson Stadium and will be broadcast on ESPN3 and the Georgia Southern Sports Radio Network.