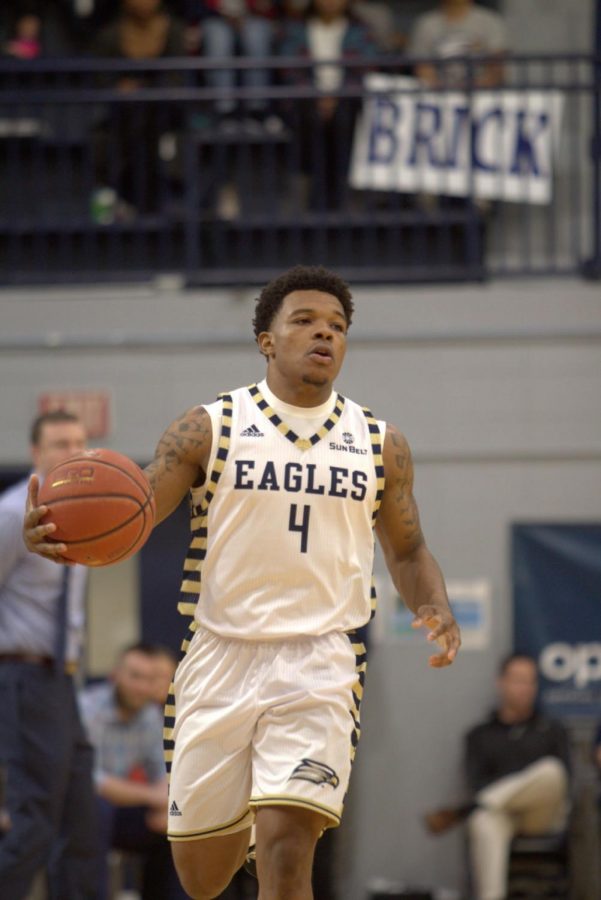 The Georgia Southern men’s basketball team opened its season with an 85-83 road win over ACC foe Wake Forest on Friday in which the Eagles led the Demon Deacons for a total of 37 seconds.

With 3.6 seconds left, GS junior guard Ike Smith was fouled in the act of shooting, and he calmly made both free throws to all but ice the game for the Eagles. Smith had previously nailed a 3-pointer with 1:02 on the clock to tie the game at 83.

Smith’s first field goal of the game pushed him across the 1,000 career point threshold, as he entered the game with 998.

Junior guard Tookie Brown led the Eagles in scoring on Friday with 22 points on 8-of-16 shooting. GS head coach Mark Byington told ESPN after the game that Brown was the vocal leader that GS needed to keep the team’s faith that they could pull the upset.

“At every huddle, Tookie Brown told them we were going to win this game,” Byington said.

The Eagles were down by as many as 14 points early in the game, but they cut the Wake Forest lead to six, 46-40 by halftime.

Back to wreak havoc

For a pair of GS seniors, Hughes and forward Coye Simmons, playing and winning in Winston-Salem to open their final season was especially meaningful.

Both Hughes and Simmons played high school basketball at Winston-Salem Prep, so they grew up around Wake Forest and understood the program’s storied history.

Hughes hit a 3-pointer with about two minutes left in the game that gave the Eagles their first lead, 80-79.

“I had no idea what the score was,” Hughes told GS Athletics’ Marc Gignac. “I just recognized that I was open, and I know my teammates have the confidence in me to take shots.”

After Wake made a jumper to quickly regain the lead, Smith took over and put the game away for GS.

Hughes was 5-of-9 from 3-point range in the game. Simmons grabbed four rebounds in 11 minutes of action.

Byington told ESPN the win gives his team confidence going forward because they won’t see a lot of opponents in non-conference or in the Sun Belt with the kind of size and length that Wake Forest possesses.

The Eagles shot better than 47 percent from the field and 40 percent from 3-point range. They made 10 out of 12 free throws and committed six fewer turnovers than Wake Forest. GS was out-rebounded, 40 to 32, but with the Demon Deacons’ size, the rebound deficit was able to be overcome with superior shooting and ball control.

Monday night at Hanner Fieldhouse, the Eagles will open their home non-conference slate with a game against Cal State-Bakersfield at 7:30 p.m. The game can be streamed online here.