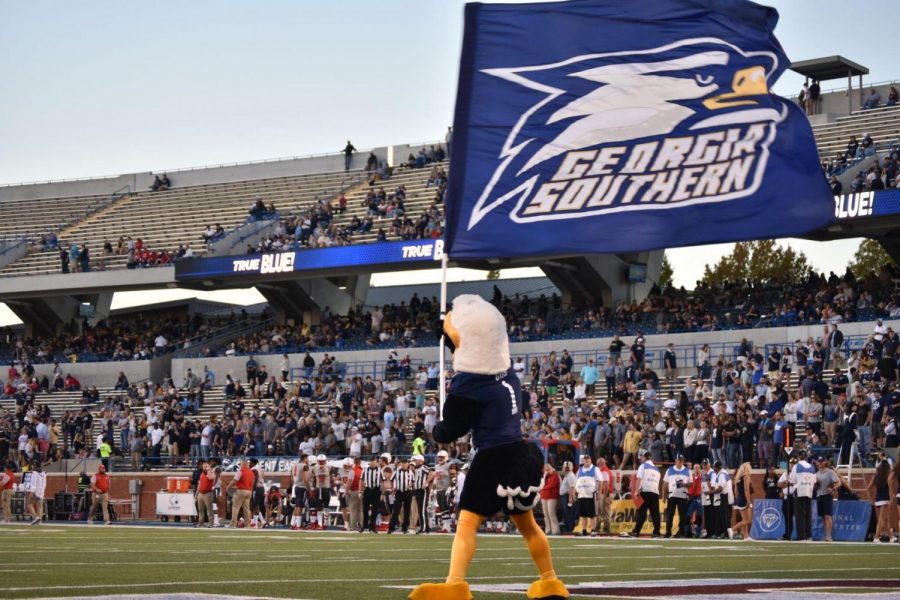 While you were eating turkey, traveling, and visiting with friends and family, several Eagles teams were putting in work over the Thanksgiving Break.

Football gets back to winning ways

In front of a small thanksgiving break crowd Saturday, Nov. 18, the Eagles took the field against South Alabama and played one of their best, most complete games in years to pick up their first win of the year. Georgia Southern dominated on all three aspects of the game on senior day.

The Eagles rushed for an impressive 367 yards and threw for another 227 passing yards on just 17 attempts.

Senior L.A. Ramsby was a man on a mission in his last game in Paulson as he totaled two impressive touchdowns and 43 yards. The defense played on a new level too, allowing less than 200 yards and 0 points. The Jaguars only reached the red zone once and they threw a pick.

The next week in Lafayette, Louisiana, Coach Lunsford extended the win streak to two with a 34-24 win over the Ragin’ Cajuns. This wasn’t as perfect a performance as the week before, but the Eagles picked up their first road win since October 22nd 2016.

Wesley Fields feasted with 192 rushing yards and a touchdown. The Eagles will look to end the season on a good note as they travel to Coastal Carolina Saturday.

Men’s Basketball puts on a show at the Showcase

The Gulf Coast Showcase continued for GS as they took on Missouri Valley Conference powerhouse Missouri State. The Bears rallied, but came up short losing 74-73. Tookie Brown continued his great season with a 20 point, 5 assist game. GS would continue in the tournament, 4-0 on the year.

Tuesday presented a new challenge in UMKC. It was another close and hard fought win for the 5-0 Eagles. This GCS semifinal was a battle that required assistance from all Eagles. Montae Glenn had a double-double with 11 points and 12 rebounds.

Mike Hughes was fouled with 3 seconds left and up by 1. Hughes tapped into his clutch gene again and sank both shots. A kangaroo launched a game-tying 3 pointer, but was slapped away by Tookie. Georgia Southern now 5-0 on the year would play Towson in the championship game Wednesday.

The championship game was without a doubt the worst game the Eagles had played all year. The team shot just 34% on the night and forfeited 11 turnovers. Jake Allsmiller led the team with 18 points.

It was a back and forth game, but the Tigers took a five point lead with 10 seconds left. Hughes was fouled and made all three shots with just 4 seconds to go. The Eagles fouled Mike Morsell who went 1-for-2 to make it a three point game. GS inbounded to Allsmiller who came up just short with his three pointer. 5-1, the Eagles looked to rebound Saturday afternoon at Bradley.

In Peoria, Illinois the Eagles played their fourth game in six days falling to the Bradley Braves 62-57. Bradley came out very strong defensively holding GS to a season-low 29 shooting percentage. The strong defense combined with natural fatigue forced the Eagles into just their second loss of the year after a 5-0 start. Georgia Southern hosts Tennessee Wesleyan Saturday night in Hanner.

The Eagles only played two games over the break and played two very different teams. The break began for them last Sunday as they played host to SEC team Alabama. The Eagles were unfortunately never really in the game going down 45-21 at the half. Georgia Southern shot just 24% on the day and went 0-for-4 from the FT line.

The Tide came into Hanner and completely upended the Eagles 84-36. Nakol Franks led the team with just 9 points. The Eagles had to quickly turn around and travel to Orangeburg, SC to take on the Bulldogs from South Carolina State Tuesday night.

Freshman Tatum Barber came up clutch with making three free throws with 0.4 seconds to play to secure the team’s 2nd win of the year.

As the football season comes to a close and basketball comes into full swing, Eagle Nation has a lot to be excited for.