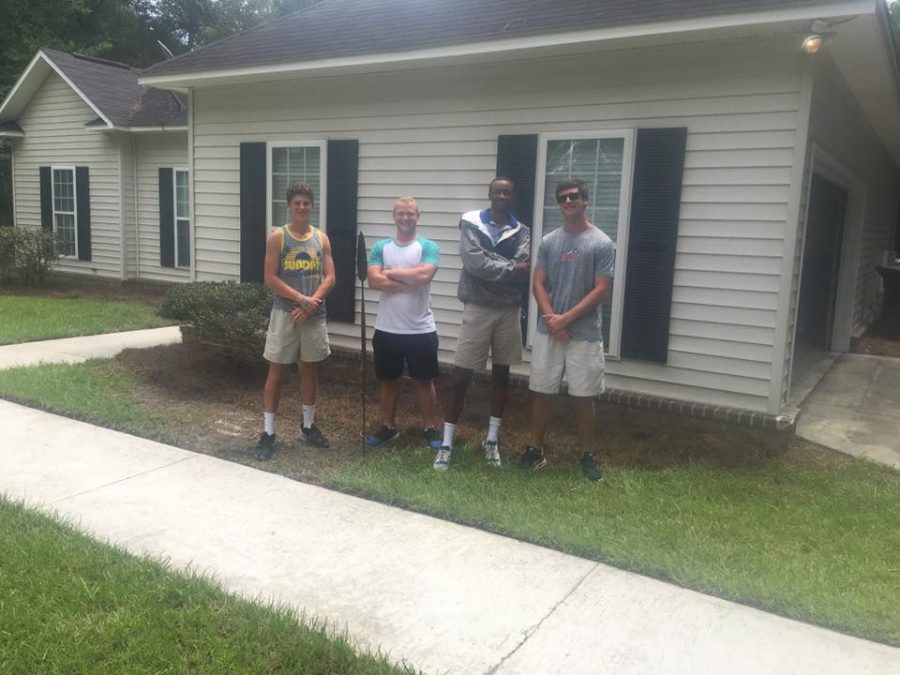 “My freshman year Deacon was a random roommate,” Seymour said. “We randomly got paired together and we got pretty close so this is our third year consecutively rooming together.”

Seymour was close friends with the two Georgia Southern University students, Jack “Deacon Harris and Garrett Harris, who passed away in car accident on I-16 the morning of Sunday, Nov. 25.

Seymour said Deacon was a junior political science major who dreamed of becoming a lawyer one day. Garrett was a freshman who lived at Centennial Place.

Deacon and Garrett’s lives at GS

Seymour recalled that the Harris brothers didn’t often attend GS football games despite their father’s past football career with the Eagles in the late 80’s early 90’s. They did, however, keep up with the games and enjoyed talking about them.

Deacon and Garrett’s favorite pass time was working out at the RAC.

“[Deacon] loved to work out. Him and his brother both were at the RAC almost everyday together working out and they got very close towards the end.”

Not only did Deacon work out at the RAC, he also worked at the facility as a Campus Recreation Intramurals employee.

“Basically what he did was, stood around and cleaned up, set up weights were they needed to be, he was there for a spot if anybody needed help spotting and he was really just one of the guys on the floor if you ever needed help with anything,” Seymour said.

Deacon and Garret enjoyed playing video games, Seymour recalled. They were also very focused on their school work as well.

Seymour remembered that when Garrett first came to GS, he did not have a driver’s license but still wanted a way to get around campus, so he bought his self a skateboard.

“On the night that he bought it, Garrett was to skittish to ride it a lot so, they brought it over to our house and we stayed up late that night just going over the fundamentals with him and teach him how to ride the thing and by the end of the night he was cursing pretty good on it,” he said.

Seymour was asked about his favorite memory of his roommate for three years and great friend.

He paused as if his was remembering all of the found memories he shared with Deacon.

“My favorite memory with Deacon would probably be the second year that we lived together, we were moving into our house and out of nowhere he brought out this giant throwing spear,” he said. “Something that looked like it came out of ancient Africa. Some old timey throwing spear.”

Seymour said he remembered Deacon saying he got the spear from his Grandpa.

“I asked him, ‘Man, have you tried it out or anything?’” Seymour said. He says ‘No, I’ve never given it a shot.’” So, we set up a target and Deacon was really excited he threw the throwing spear and as soon as it hit the ground it just snapped in half. That was definitely up there with my favorite memories of him.”

According to The Atlanta Journal-Constitution, the family has scheduled a memorial service at 4 p.m. Saturday at Cauble Park on Lake Acworth in Acworth. A GoFundMe page has been established to assist the family of the brothers with funeral expenses.