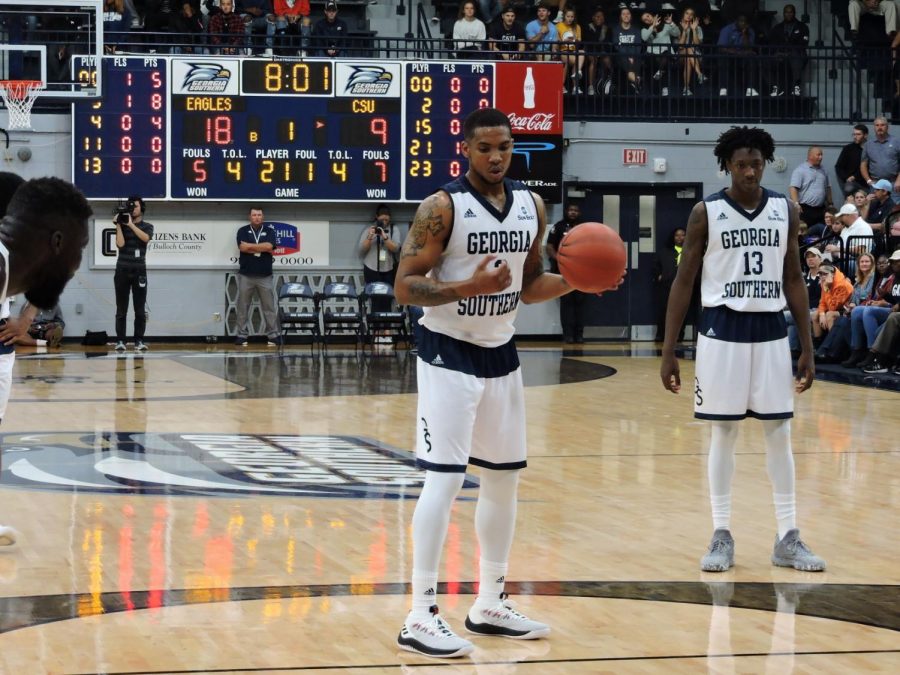 Ike Smith prepares to shoot a free throw against CSU-Bakersfield. Smith had 21 points and seven rebounds. He was 3-for-4 from the line.

“I feed off him, and he feeds off me,” Smith said. “But when you got teammates like Jake [Allsmiller] and Mike [Hughes] and I could go down the list, they can just give us so much confidence to keep being aggressive and keep shooting.”

Buckets by Brown and Smith followed, and the Eagles opened up a 10-point lead halfway through the period that allowed them to stay fresh all half by using some bench players that came in and played tight defense.

“We have some guys who can really change the game defensivly or rebounding … a lot of different ways,” Byington said. “Not everyone is going to score 20.”

The second unit came in and held their own against the supposedly high-scoring Roadrunners, allowing starters like Brown and Smith to stay energized.

“We’ve got a bunch of guys that can play multiple positions,” Brown said. “That can give me and Ike a break, on and off the ball, so I think that really helps.”

Brown led the Eagles with 13 points in the half, hitting all seven of his free throw attempts. Smith followed with 11 and four rebounds.

The Eagles as a team were 15-of-19 from the foul stripe while the Roadrunners missed all six of their first-half attempts at the line. GS drew 14 fouls on its opponent in the half, a sign of the Eagles’ unrelenting aggression attacking the rim.

Defense was also key in the first half as GS shot just 35 percent from the field but held CSU-Bakersfield to a mere 32 percent shooting.

Only four Roadrunners managed to score in the first half, led by redshirt junior guard Damiyne Durham with 8 points.

After about three minutes went by in the second half, the overhead lights in Hanner Fieldhouse dimmed, then shut off, then turned back on as a Roadrunner stepped to the foul line.

A minute later, the same thing happened again. For a moment, the gym turned into an episode of “Stranger Things,” and the PA announcer said next time it happened would be a technical foul on GS.

With about ten minutes to go, Brown went down hard, landing on his right ankle and went briefly back to the locker room. When he emerged, trainers wrapped his ankle and he returned to the bench. Eventually, he re-entered the game and seemed to be moving around well.

Tookie Brown goes down on this play. Getting looked at in the locker room now. pic.twitter.com/RPnwn6GFgW

GS continued its dominant defense in the second half, and CSUB continued to miss free throws. Brown finished with 24 points on 7-of-8 shooting and went 9-of-10 from the foul line. Smith notched 21 points, including going 4-of-7 on 3-pointers. He also grabbed seven boards. Many of Smith’s shots were well-contested, but his high release point makes his shot nearly impossible to block.

Glenn added nine points and seven rebounds, senior forward Coye Simmons had seven points, and Jones had three assists off the bench for the Eagles.

Monday’s game was a grind-it-out affair after a shootout at Wake Forest. It showed the Eagles can win all types of games in multiple different ways. On Monday, GS held CSUB to 40 percent shooting.

“We’ve gotten much better on defense,” Byington said. “The way we started the game set the tone defensively. Even the shots they made were good defense.”

Byington stressed that he tries to teach his players how to handle success. He says they’ve gotten better at not letting “pats on the back” go to their head and affect their quality of play.

After the win at Wake Forest, Byington was pleased with his team’s response, and he said that the key was staying in the moment and not looking too far ahead in the season.

“I told the guys let’s have a good practice tomorrow,” Byington said. “We’re not even thinking about Sun Belt basketball. You’ve got to stay in the moment, and if you do that, then you’ll be good when the time comes.”

The 2-0 Eagles are back in Hanner Thursday night at 7 p.m. against Bluefield State.