For volleyball, time to finish strong 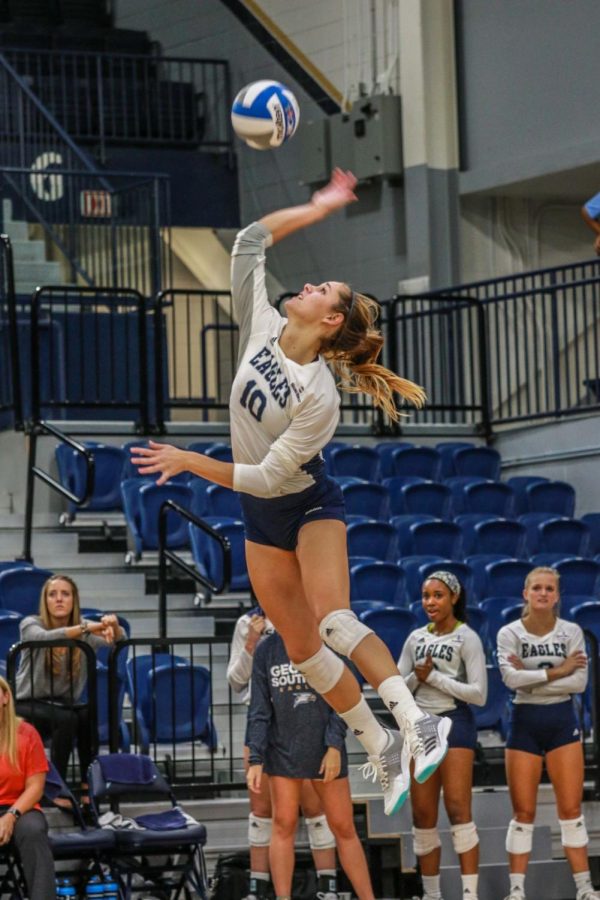 Senior Cathrine Murray serves in a match at Hanner Fieldhouse earlier this season.

The Georgia Southern women’s volleyball team kicks off the final stretch of their season on Monday, Nov. 6, 2017, against Savannah State at 6:30 p.m.

The 7-19 Eagles look to take down the 3-23 Savannah State Tigers at Hanner Fieldhouse today at 6:30 p.m. During their 2017 campaign the Tigers are currently 1-11 on the road, while the Eagles are currently 4-6 at home.

While attacking, the upper hand goes to the Eagles. During the 2017 season, the Eagles currently have 1,036 kills with only 485 errors, according to the Georgia Southern Women’s Volleyball page.

The Tigers, on the other hand, while attacking, have 766 kills with 529 errors, according to the Savannah State Women’s Volleyball page. Additionally, the Eagles beat the Tigers three sets to one on Oct. 10, 2017. With the advantage going to the Eagles, the Tigers will be a tough task nonetheless.

The Eagles are currently ranked second to last in the Eastern half of the Sun Belt and need to win at home against the Tigers. To top of the season, the Eagles will do battle against the other GSU—Georgia State.

The Panthers are currently 2-12 in conference play and have an overall record of 8-19. The Eagles will play the Panthers twice this upcoming week, Wednesday, Nov. 8, 2017, and Saturday, Nov. 11, 2017. Wednesday’s competition will be the final home game of the season and will take place at 6:30 p.m at the Hanner Fieldhouse.