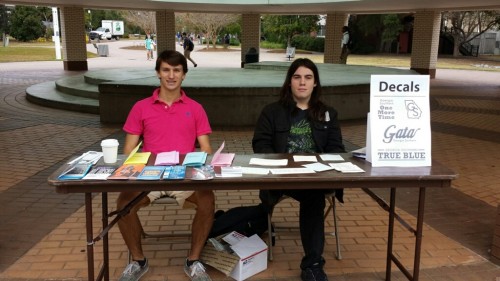 The Secular Student Alliance has a booth at the Russell Union Rotunda today until 2 p.m.

The SSA is selling car decals for $3 to raise money for trips and conventions, like ReasonCon.

“ReasonCon is where people talk about the separation of church and state and stuff going on around the world. We also want to go to Savannah to recreate an experiment from YouTube where we raise money as if we’re with a Christian group versus atheist and gauge peoples’ responses,” Carnes said.

The SSA supports local charities like the Ronald McDonald House and the women’s shelter in Savannah.