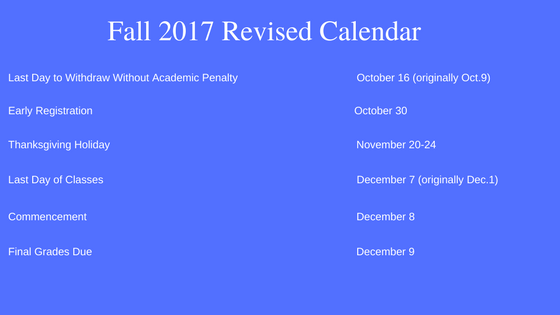 Georgia Southern University faculty members Brandi Moody and Tyson Davis said they’re satisfied with the administration’s recent revision to the academic calendar, which adds another five days of classes in December, among other changes.

Davis, a multimedia film and production instructor, said he doesn’t have a problem with the revision.

“I honestly don’t see where regular school continuing through finals week makes any big difference,” he said. “I mean, we are here, anyway. You can call it finals week, but we are still here working and studying and spending two hours in each class.”

Davis added that he doesn’t see the extension of classes as a punishment by administration and said the revision was necessary due to accreditation requirements.

Davis also referenced the length of summer classes to support his reasoning.

“Quite frankly, if we can fit regular semester classes into four-and-a-half weeks during the summer, I just don’t see it being a big problem not having the regular final exam time over four days of a 16-week semester, in lieu of just continuing classes,” he said.

“I don’t think there are many options and it seems to me to be the most logical,” he said. “I think the plan implemented by administration made and makes the most sense.”

Moody, a first-year writing instructor, suggested a slight tweak to the revision, an idea that probably would have resulted in contention from some in the university community: Saturday classes.

“It might not be a popular idea,” she said. “But if we could have managed it… that might have eaten less into time both instructors and students need during finals week.”

Overall, Moody said she’s satisfied with the revision, even though it means the last week of classes will be more hectic as a result.

Students: ‘It is what it is’

Students offered their thoughts on the revision and most adopted a realistic attitude about the matter.

“It makes sense, but I don’t want to be here any longer,” said Joe Guilbaud, senior marketing major.

“I’m disappointed,” she said. “I wanted to go home and on vacation earlier.”