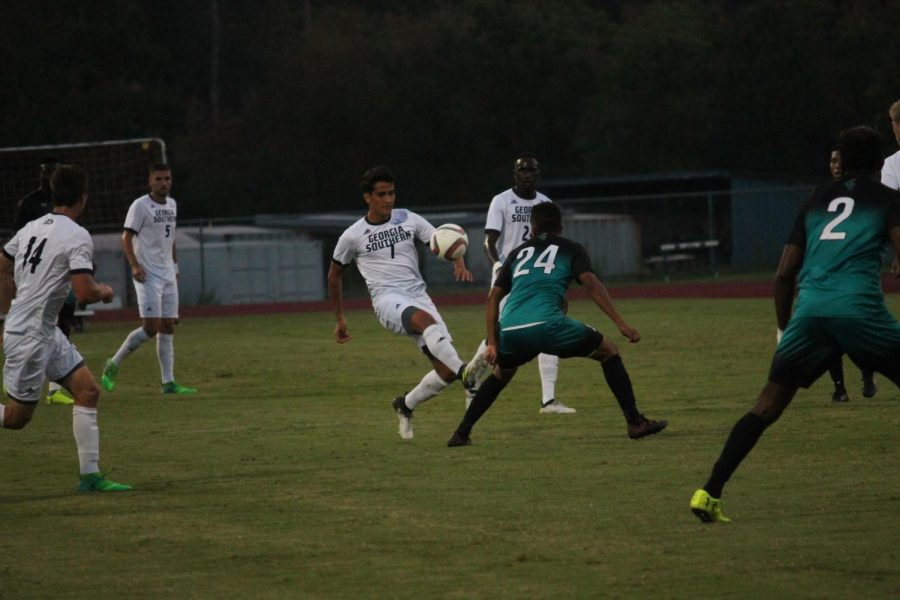 Javier Carbonell dribbles in a home match this season. Carbonell scored the Eagles' lone goal in the loss to Georgia State on Saturday.

On Saturday night, the Eagles men’s soccer team fell to the Georgia State Panthers 3-1. Although the score might reflect a lopsided match, it was all but that.

While the match was packed with aggression and skill, the Panthers highlighted the Eagles’ weak points.

“The softness we have as team needs to be eradicated,” GS head coach John Murphy says in response to the loss. “We have to do a better job with the group that we have and we need to work with the players we have.”

Both teams came out strong, as shown by the recorded shots – GS out-shot State 6-5 in the first half. There was also a sense of tension in the air due to the standing rivalry between the two universities, displayed by the constant aggression throughout the half. There was pushing, shoving, tripping and verbal confrontation.

There were quite a few set plays that resulted from fouls, one of which was a root cause of a goal being scored. Georgia State scored in the 32nd minute courtesy of Kyle Clinton heading the ball into the goal off a free kick.

“I think the turning point was the first goal because I think that where they saw we have a softness on set pieces,” Murphy said. “I think everything derives from that.”

Georgia Southern then countered with attacking play it was obvious they were heating up by the time the half ended, with more shots being fired and a couple of set plays being made.

“I felt we weren’t out of the game,” said Murphy. “The way that we responded was quite good.”

Coming out from halftime the Eagles continued to keep up the intensity. In the 48th minute junior forward Javier Carbonell tied up the game for the Eagles by sending a laser shot into net on a free kick.

The third goal of the game was scored in result of another foul call, but this one was inside the 18-yard box, calling for a penalty kick for the Panthers. Hannes Burmeister put away the PK in the 62nd minute to put State back in the lead, 2-1.

Things then started to become very tense, the pushing, and shoving becoming more obvious and intentional.

Three yellow cards were handed out during the second half – two to the Eagles and one to the Panthers. There was yelling amongst the players, at each other and at the referees, all of which just intensified the game even more.

Southern had the chance to come back and put the ball away with two back-to-back header shots, both of which attempts failed, but continued to fuel the Eagles.

The game and the Eagles’ fate were sealed in the 88th minute when Rashid Alarape from the Panthers challenged a Georgia Southern defender, came out with the ball, dribbled through the Eagles’ defense, and finished off by putting the ball in the back of the net.

Georgia State came out hard and intense, and Southern tried to match that intensity but couldn’t quite reach the Panthers’ level.

But the Eagles won’t let this loss bring them down, moving forward their goal is to find a way to prepare themselves mentally and physically for every game.

Preparing for the next game

The Eagles are now at an even record: 5-5 this season and 1-1 in the Sunbelt.

For their next matchup Georgia Southern will be hitting the road to Buies Creek, North Carolina as they take on Campbell University on October 11 at 3 P.M.