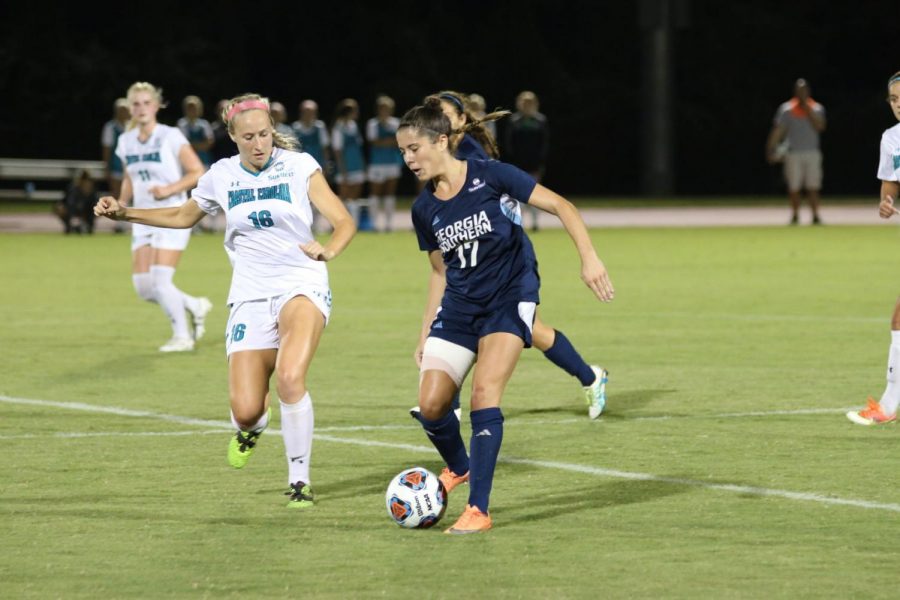 This weekend was frantic in the Georgia Southern sports world, with seemingly every team competing. This week’s brief will give just a brief overview of each sport’s results.

The Eagles hosted the two Louisiana Sun Belt teams on Friday and Saturday. GS lost, 1-3, to Louisiana on Friday evening, but came back to Hanner Saturday to sweep Louisiana-Monroe, 3-0. The win pushed the Eagles to 3-8 on the season.

Against ULM, junior Lauren Reichard tallied 10 kills on the way to the Eagles’ first conference win this year.

Next up for the Eagles will be South Carolina State, also in Hanner, Tuesday at 6:30 p.m.

With two tough conference road matches over the weekend, the Eagles picked up two defeats, each by a margin of one goal.

Texas State defeated GS, 1-0, on Friday and Louisiana beat the Eagles, 3-2, on Sunday afternoon. Freshman midfielder Elvira Gustafsson scored the first goal of her GS career on Sunday, and freshman forward Juvenia Hylton added her second of the season. The Eagles are now 3-5-1 on the season.

Next up for women’s soccer will be South Alabama in a home match at Eagle Field on Friday at 7 p.m.

The GS men’s soccer team had its three-game winning streaked snapped at home by the Mercer Bears, who scored two goals in the first half – a deficit the Eagles could not overcome as they lost, 2-1.

“Our ability to keep the ball tonight and get a hold of it was as poor as I’ve ever seen, and I’ve been here two years.” Murphy said.

“We’re tripping over ourselves like I’m watching my son’s U8 game … it reflects on myself and my staff, and we need to work on some things.”

The Eagles will be at Eagle Field again Wednesday at 7 p.m. for a match against Jacksonville University.

In Greenville, S.C. over the weekend, the Eagles placed 16th out of 17 teams at the Lady Paladin Intercollegiate.

The young team showed improvement from the first tournament, with sophomore Ella Ofstedahl leading the team with a 13-0ver-par performance through three rounds of play. Ofstedahl shot a 3-over-par 75 in the final round.

Next Monday, Oct. 2, the Eagles will begin their next tournament, the Jacksonville Classic at Jacksonville University.

The Eagles had their opening two competitions this weekend, losing both of them but posting school records on Friday for a young program on the upswing.

Freshman Lilyanne Wade and junior Rosemary Kramer each had aggregate scores of 1135 to lead the Eagles.

The GS school record for small bore, one of two rifles used in competition (the other is the air rifle) was set as a team against the No. 3 ranked team in the country, the Murray State Racers.

On Saturday, Oct. 7, the Eagles will be in Lexington, Virginia for a doubleheader against VMI and Morehead State.

The Shoal Creek Inviatational begins Monday in Birmingham, Alabama. It is the first event of the fall for the highly-touted Eagles.

Check back for results later in the week.