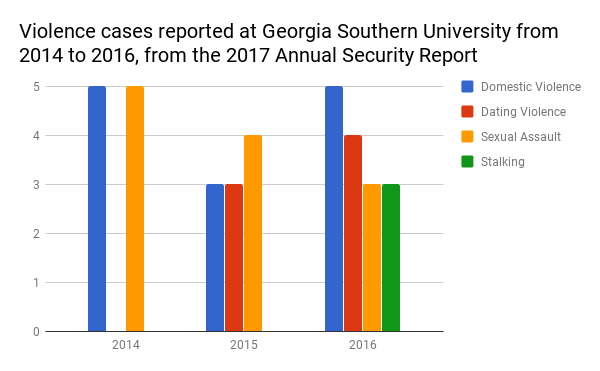 College can be the first years of adulthood for many students, adding responsibilities and freedoms previously unknown to their lives. As a result, students may experience their first romantic relationships without their familial support systems right behind them.

According to the Bureau of Justice Statistics, young adults ages 18 to 24 are at the highest risk for domestic violence. Perhaps awareness of the warning signs of relationship abuse can help young adults assess their situations.

Sometimes, red flags of relationship abuse can be hard to identify. Here is a guide to help.

What is relationship abuse or domestic violence?

“Domestic violence (also called intimate partner violence (IPV), domestic abuse or relationship abuse) is a pattern of behaviors used by one partner to maintain power and control over another partner in an intimate relationship.”

Abuse can happen to anyone, regardless of gender, age, sexual orientation or economic background, the hotline states.

According to the hotline, abusive people believe they have a right to control and restrict their partners, and they believe their own priorities and needs should be the priority in the relationship. They abuse to gain and maintain power and control over an intimate partner.

In 2016, five domestic violence cases and four dating violence cases were reported to the Georgia Southern University police, according to the 2017 Annual Security Report.

The report defines domestic violence as a felony or misdemeanor crime of violence committed:

Dating violence, the report states, is violence committed by a person who is or has been in a social relationship of a romantic or intimate nature with the victim. It includes, but is not limited to, sexual or physical abuse or the threat of such abuse.

Domestic Violence in Georgia and Nationwide

Found via the National Coalition Against Domestic Violence:

The State of Georgia ranked No. 9 in the country for the rate at which women were killed by men in a 2014 report by the Bureau of Justice Statistics in the US Department of Justice.One in three women and one in four men in the United States have experienced some form of physical violence by an intimate partner, according to the 2010 National Intimate Partner and Sexual Violence Survey by the Center for Disease Control.Intimate partner violence is most common among people ages 18-24, according to the 2014 report by the Bureau of Justice Statistics.

Jodi Caldwell, Ph.D., is the director of the GS Counseling Center, chair of the Sexual Assault Response Team and a member of the Board of Regents’ Violence Against Women Task Force.

Abusive relationships, Caldwell said, are not usually abusive from the beginning.

“Abusive relationships often start where the abusive partner is extremely charming, seems very accommodating, almost sweeps the other partner off their feet,” Caldwell said. “And then, it’s kind of a slippery slope from there, with the controlling and abusive behavior beginning.”

Safe Haven, a Statesboro emergency safe house for adult and child victims of domestic violence, provides information on abusive relationships on their website. Red flags identified by Safe Haven are as follows.

Threatens to kill him/herselfConstantly criticizes you or makes you fearful to disagree with themControl who you see or what you do in a way that interferes with your work, education, or personal lifeCalls you names or belittles youBecomes extremely jealous of family and friendsSays, “I did it for your own good”Has a temper that frightens youAccuses you of being unfaithfulForces you to do things you don’t want to sexuallyMonitors your whereabouts at all timesQuestions your parenting skillsControls your moneyTells you what to wearShoves, slaps or punches youHurts your petsBreaks things

Physical violence may begin with yelling, then moving to name-calling, aggressive acts disguised as accidents and, finally, to targeted physical violence, according to Caldwell.

“After the violence, there’s always the honeymoon phase,” Caldwell said. “That’s when your partner is just at their most charming, so the ‘I’m so sorry,’ the ‘that’ll never happen again,’ ‘if you haven’t done XYZ, I wouldn’t have done this,’ ‘if you just don’t do that, I’ll never do whatever it is again,’ that kind of behavior, and it just continues to cycle.”

According to the National Intimate Partner and Sexual Violence Survey by the CDC, people in the GSM community are at higher risk for a variety of acts of domestic abuse than people in heterosexual relationships.

“[The] same [domestic violence] resources are available to anyone in a GSM community. Safe Haven serves anybody in any kind of a relationship. It doesn’t matter what the sexual orientation or gender identity of either of the partners might be,” Caldwell said.

Men in heterosexual relationships can be victims of abuse just like anyone else, but for them, there is an added stigma in reporting or seeking help for abuse, according to Caldwell.

“Safe Haven has housed many a male victim of domestic violence as well,” Caldwell said. “And it does take that added level of courage for them to come forward, because, reality is they are going to face those [gender] stereotypes as their situation comes to light with their families and friends.”

Victims of abuse may have difficulty recognizing their dangerous relationships and seeking help. Abusive relationships begin almost normally, slowly descending into abuse, according to Caldwell. Additionally, victims might be concerned no one will believe them.

“Often, people who tend to be abusive in their relationships can be very charismatic outside of that romantic relationship, so also the fear that others are not going to believe them,” Caldwell said.

Victims who have been with their partners for a long time may be isolated and separated from their support systems, like their families and friends, Caldwell said. They also might not know about resources for getting help.

Finally, victims of abuse might feel a sense of shame or embarrassment, preventing them from wanting to seek help, Caldwell said, even though they did nothing wrong.

There are resources in the Statesboro community for victims of abuse regardless of gender or sexual orientation.

“At Georgia Southern, the Counseling Center is a great place to turn. It’s confidential, we can let people know what kind of resources are out there at their disposal and help make a plan, if what they want to do is to leave the relationship,” Caldwell said. “They may just want to talk about the relationship. Nobody here’s going to force them to make a decision.”

If someone needs to get out of an abusive relationship quickly, the domestic violence shelter Safe Haven provides housing, food and shelter and their staff helps victims become independent and get back on their feet, both emotionally and financially.

Safe Haven’s location is confidential, so if someone needs to go to the shelter, they must call the 24-hour crisis line at 1-800-33HAVEN.

What to do if you have abusive behaviors

Caldwell said that recognizing one’s own abusive behaviors is a huge step and they should seek counseling to see where that behavior is coming from.

“I believe in change, or I wouldn’t be a therapist, so I think that if they were open to trying to figure out why that controlling or abusive nature comes out, that they could definitely change those dynamics,” Caldwell said.

What if a friend or a loved one is being abused?

Safe Haven provides information on how to recognize domestic violence. People who are being abused may receive frequent, harassing phone calls from their partner, dress in clothing to hide bruises or scars or be restricted from seeing family and friends.

If a friend or a loved one is being abused, Caldwell advises to reach out to the victim.

“Definitely approach the person the person and just say, ‘I’m worried about you. If you need help, please call me.’ Or [let them know] you’re here to listen,” Caldwell said. “You may not be met with a warm reception, because sometimes folks are very defensive when they’re in those situations, but … let them know that you’re there, that you’re concerned for them, provide them with community resources so that they have that information if they ever need it. That’s really the best that you can do.”