Frustration grows for Summers as Eagles fall to 0-5 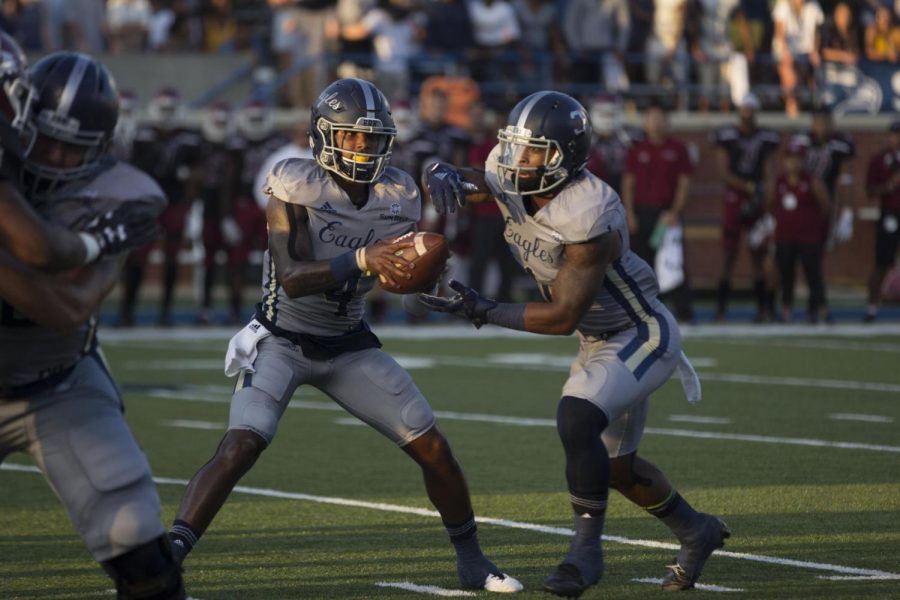 Shai Werts hands off to Wesley Fields in the first half against New Mexico State. Fields rushed for over 100 yards for the second time in his career.

Georgia Southern fell to 0-5 on the season after a 35-27 homecoming loss Saturday against New Mexico State.

GS went into halftime up 24-21, but was unable to sustain the lead as the Aggies won the second half, 14-3.

After the game, GS head coach Tyson Summers called the loss “a tough pill to swallow.”

“My heart goes out for these young men, as hard as they are working, as much as they deserve a win, and as much as we’ve worked to put ourselves in an opportunity for a win, we weren’t able to get it,” Summers said.

He added, “We obviously didn’t move the ball the way that we needed to [in the second half].”

The first quarter featured both teams trading blows and both defenses struggling to stop their opponent.

New Mexico State struck first and quickly as senior quarterback Tyler Rogers hit a wide open O.J. Clark to put the Aggies in a first-and-goal situation at the GS 5-yard line. Rogers ran it in himself to put the Aggies ahead 7-0 with less than three minutes elapsed in the opening quarter.

The Eagles responded with a 15-play, 67-yard drive that ended in a powerful 1-yard touchdown run by senior running back L.A. Ramsby.

After the Aggies came back and burned the GS secondary on a 59-yard touchdown pass to Gregory Hogan, the Eagles punched back with a big play of their own. Junior running back Wesley Fields took it 48 yards to the house to tie the game at 14 just as the first quarter was ending.

“We’ve had some more explosive runs,” Summers said. “But we’ve got to be able to do it when it counts most.”

GS took its first lead, 17-14, midway through the second quarter when sophomore kicker Tyler Bass nailed a 32-yard field goal. GS sophomore corner Monquavion Brinson had won the ball for the Eagles by ripping an interception right from the hands of an Aggie receiver.

Senior NMSU wideout Jaleel Scott caught a 5-yard touchdown on a fade route with just under five minutes left in the half.

On the ensuing kickoff, GS redshirt freshman receiver Dexter Carter Jr. fielded the short kick and switched fields, catching the Aggie kickoff team off guard and sprinting 70 yards for the first touchdown of his career. That put Georgia Southern on top, 24-21, which would remain the score heading into halftime after Aggie kicker Dylan Brown missed off the the right goalpost on a 44-yard field goal attempt.

In the first half, GS rushed for 139 yards including 98 by Fields on his 10 carries. They, however, went just 1-for-6 on third down against 5-for-8 by the Aggies. Brinson carried the Eagle defense in the first half, leading in tackles with five and getting a key pass breakup along with his second interception of the season.

For the Aggies, Rogers was 18-for-33 for 247 yards and two touchdowns in the first half. NMSU outgained GS overall in the half, 268 to 152. Without star running back Larry Rose III, backup Jason Huntley was held to just 12 rushing yards in the half on five carries.

Two GS defensive starters, junior linebacker Tomarcio Reese and junior safety R.J. Murray, were both ejected for targeting penalties in the first half.

Bass extended the lead to six at 27-21 by nailing a 41-yard field goal early in the half. Fields went over 100 yards rushing for the second time in his career with just over 6 minutes left in the third quarter.

Huntley picked up his production for NMSU in the second half, outrunning the GS linebacker matched up against him on one 39-yard play that put them inside the GS 25-yard line. The play set up a 17-yard wide-receiver pass for a touchdown from senior wideout Conner Cramer to senior tight end Bryce Roberts.

After NMSU took the lead, 28-27, they were driving again when Brinson stepped in front of a Rogers pass and picked it off, his second of the game and third of the season.

“We keep getting better and better every game,” Brinson said after the game. “We’ve just got to get a win. When we get a win, we’re going to roll.”

Midway through the fourth quarter, junior center Curtis Rainey was penalized and ejected for fighting, making him the third Eagle starter to be ejected on the night. While the targeting calls were questionable, the play by Rainey was inexcusable and cost GS momentum at a critical point in the game.

On 3rd-and-goal with just over two minutes to play, Rogers hit Scott for a leaping touchdown that put the Aggies up by eight, 35-27.

Shai Werts hurled a bomb towards Obe Fortune on 3rd-and-18 on the Eagles’ final drive, but the ball sailed through Fortune’s hands and fell to the turf.

Werts’ desperation scramble on the next play ended with him being shaken up and New Mexico State taking over on downs. The game ended after Werts was helped off the field looking woozy and New Mexico state took a knee and the 35-27 road win.

For the Eagles, valiant efforts from certain players were negated by costly penalties and momentary mental lapses.

“It’s just little mistakes that put us in a hole,” DeLaRosa said. “Penalty here, penalty there, guys getting ejected; just dumb things that we need to cut out.”

When all was said and done, GS lost NMSU receivers too many times over the middle, and the Aggies quarterback made too many accurate red zone throws en route to a 382-yard, 3-touchdown performance on his part.

Homecoming was another loss with bright spots for the Eagles, but the bright spots are perhaps meaning progressively less and less to GS fans, coaches and players until the program can pick up a win.