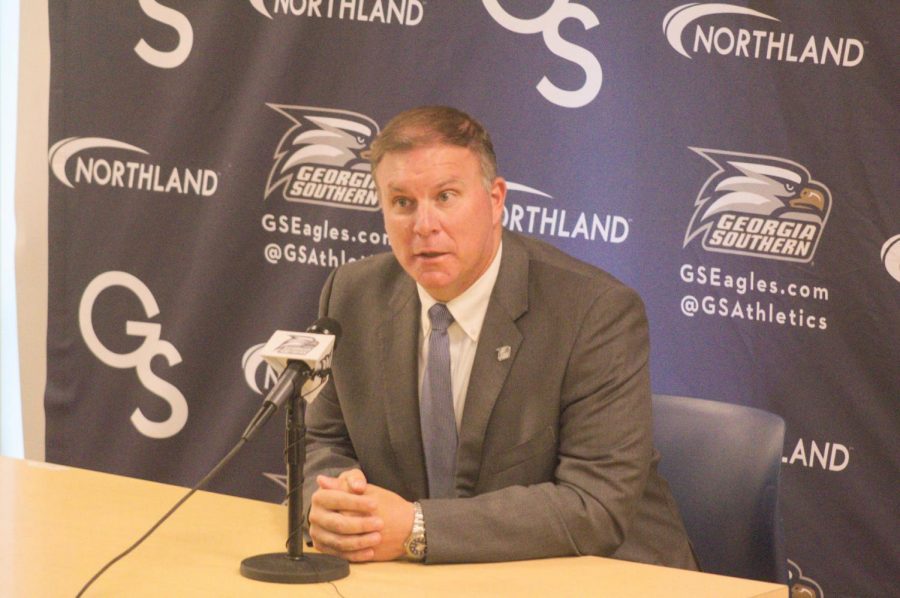 Athletic Director Tom Kleinlein introduced Coach Lunsford at the press conference on Monday. Lunsford is the fifth coach for the Eagles during Kleinlein's time.

“Show up, ’cause we’re going to show out,” Lunsford said.

He was introduced by the athletic director as he addressed media from the region for the first time as the head coach at Georgia Southern.

Following the announcement of Lunsford’s temporary promotion, a press conference was scheduled for Monday.

Athletic director Tom Kleinlein explained some of the reasoning for moving on from Tyson Summers and promoting Lunsford as interim head coach.

After thanking Summers for his off-the-field contributions, Kleinlein started looking forward. When asked about the midseason timing for the firing, he said it was was “to give us time to really attack that first recruiting period.”

Kleinlein made it apparent that he didn’t want to rush things or jump into any rash decisions when selecting a new head coach.

Lunsford’s passion for Statesboro, the school and his team was made very evident, and he went on to say he was “very fired up” for this new role.

Though he didn’t want to put any game plans or plans with where the team was at in stone, Lunsford said that “the overall morale of the team is good.”

The interim head coach handled the fact that this team is 0-6 very well and didn’t stray from that reality.

“Obviously we haven’t gotten results in the win column…we’ve got plenty of time,” Lunsford said.

Several members of the press questioned Lunsford on his coaching philosophy.

“It’s all about trying to make the team unified,” he said. “We talk about brotherhood around here and playing for one another … it’s not rocket science when you’re playing football.”

Lunsford made it a point to address the students and community to ask for continued to support of the team.

The press conference concluded with a question about is Lunsford sees these last six games as a resume or interview. After asking jokingly, “Is this appropriate?” he responded, “Dang straight I do.”

Eagle fans will begin to be able to see if the mid-season switch translates to improvement on the field on Saturday as the Eagles travel to Troy looking for their first win of the season.