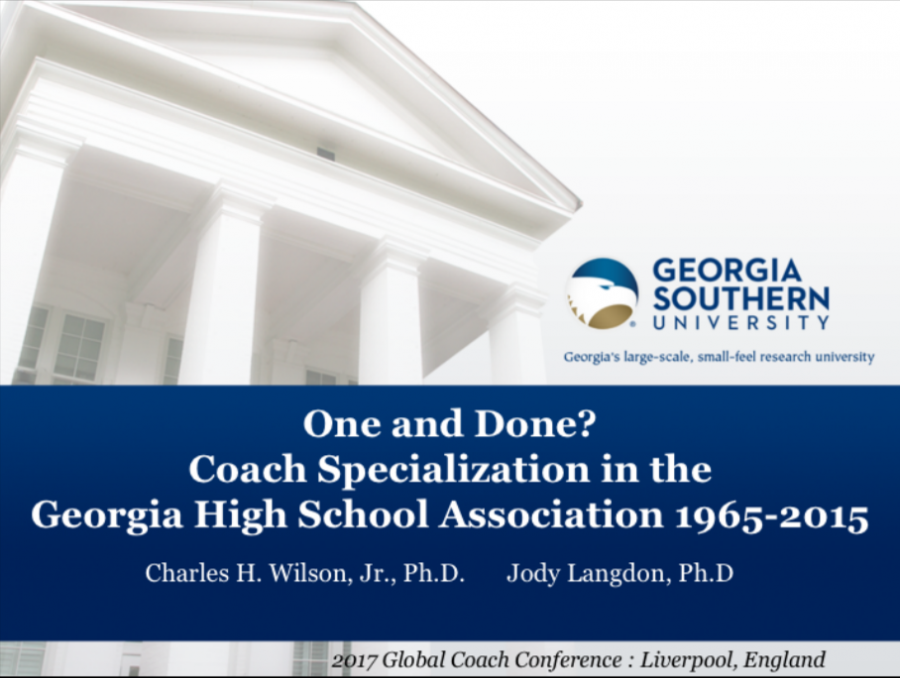 Two Georgia Southern University professors recently returned from a trip to Liverpool, England where they presented a research study on coach specialization at the International Council for Coaching Excellence’s Global Coach Conference.

Their research mission was to determine whether the coach specialization rate in the state of Georgia increased from 1965 to 2015.

What is the International Council for Coaching Excellence?

The ICCE is a non-profit organization based in Leeds, England whose mission is to lead and develop sports coaching globally. The ICCE has held numerous conferences and research fairs in Europe, the United States, Africa and Asia.

Wilson and Langdon were selected by a peer-reviewed submission process to present their coach specialization study, entitled “One and Done: Coach Specialization in the Georgia High School Association, 1965-2015.”

What is coach specialization?

According to Wilson and Langdon’s conference report, “Coach specialization is coaching only one sport while excluding others.”

A 2013 study found that sports specialization, another type of athletic specialization in which athletes train intensely in one sport and exclude others, can cause injury, stress and mental burnout to young sports players.

In addition to their primary research mission, Wilson and Langdon sought to understand the possible impact of several variables on the rate of specialization, including year, school size, location and type of sport coached.

From there, they would be able to better determine the effects that specialization has on coaches as well as athletes.

After analyzing more than 19,000 coaches from school directories buried in the Georgia High School Association’s archives, Wilson and Langdon found that coach specialization did, in fact, increase over a 50-year period.

In addition, the specialization rate was found to be influenced by the year and type of coach.

Wilson said he has yet to conduct research on why the specialization is occurring, but he has a few ideas.

“In my opinion, it is the increased pressure on coaches to win, to win immediately, to win consistently and to win in a manner that pleases their community,” he said.

Wilson added that there is nothing wrong with coaches and athletes choosing to specialize, however, he highly encourages them to coach or play other sports while doing so to improve their practice and learn from those outside of their specialty.

Langdon agrees with Wilson’s reasoning as to why the specialization might be occurring.

“Especially with football, I think a lot of it has to do with the way that it’s focused on in the media, the pressure from parents to win so that their kids can get into college and get scholarships,” she said. “Any coach is going to drive to win, but the idea of ‘more is better’ is certainly not the case.”

Wilson and Langdon will continue their research on coach specialization. The scholars said they wish to use a larger sample size in the future, possibly analyzing coach directories in states other than Georgia.

Following more research, the professors said they plan to study how specialization influences and impacts the experiences of both coaches and athletes.

Langdon said planning for the next phase of research will begin in about a year.